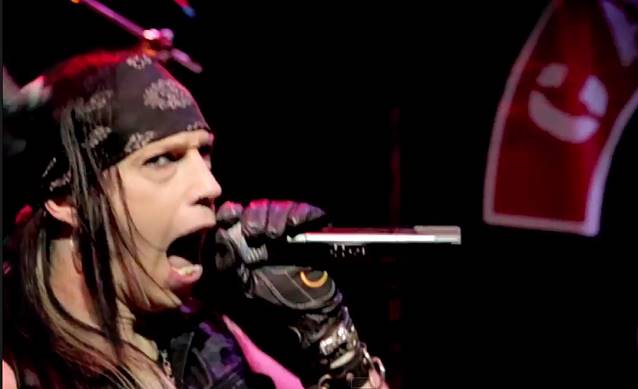 "Punched In The Gutz", the new video from U.K. glam metal legends TIGERTAILZ, can be seen below. The song is taken from TIGERTAILZ's new EP, "Knives", which was released on October 15, 2013 via Scarlet Records. The CD was recorded at Red Rock Studios in South Wales.

Featuring footage of the band on the road during their extensive U.K. "Knives" tour last November, the "One Life" video sends out a strong anti-war message, and pays poignant homage to the men and women who serve their countries, as well as the thousands of civilians who have been lost to war. With 2014 also marking the centenary of the outbreak of World War One and the 70th anniversary of D-Day, that message seems both relevant to today and steeped in history.

Guitarist Jay Pepper had this to say about "One Life": "'One Life' is dedicated to the allied servicemen and women currently fighting overseas in Afghanistan and Iraq — and also the thousands of civilian lives that have been lost in the recent wars within the region. But it's also a reminder of the tragic loss of life in any war. Syria being the latest debacle.

"It seems we just never learn...

"Most of us can only imagine what it feels like to endure death and destruction on a daily basis. But hopefully the lyrics in some way capture what goes through someone's mind when their caught up in these devastating situations.

"If the song brings some small comfort to one person, then it was worth writing..."

TIGERTAILZ' current incanration is working on its second EP, "Daggers", tentatively due later in the year.

"Punched In The Gutz" video: