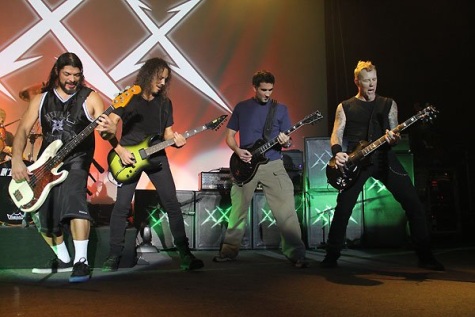 After opening sets from THE SOUL REBELS brass band and LÄÄZ ROCKIT, as well as an appearance by former FAITH NO MORE guitarist Jim Martin — who took to the stage with METALLICA frontman James Hetfield to honor late METALLICA bassist Cliff Burton — METALLICA rocked the capacity crowd with a 21-song set which featured selections from all periods of the band's career, including a previously unreleased track from the "Death Magnetic" sessions called "Hell And Back".

METALLICA frontman James Hetfield told The Pulse Of Radio he had a wishlist of people he hopes can make it for the remaining gigs. "Well, Lemmy [Kilmister, MOTÖRHEAD mainman] for sure. Ozzy. And then, you know, there's lots of other people along that way. Tony Iommi [guitarist, BLACK SABBATH], I mean, all the bands that we've admired over time, some of the bands that maybe have supported us, you know... There's so much, so many great moments that could be had."

The last show will take place on Saturday (December 10),with special guests and events, rare songs, varied setlists and more.

The band has booked several European shows next summer, including one at a venue in Denmark that used to be a prison, at which it will perform its self-titled 1991 effort, a.k.a. "the black album," in its entirety.

METALLICA was formed when Ulrich, who had moved to Los Angeles from Denmark, placed an ad in a local paper called The Recycler looking for other musicians to play with. The ad was answered by guitarists James Hetfield and Hugh Tanner of the band LEATHER CHARM.