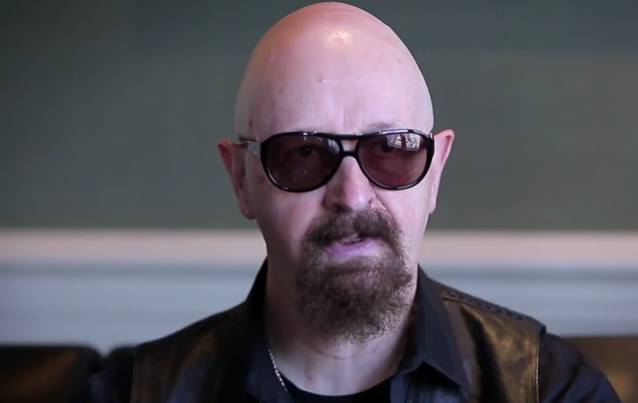 ROB HALFORD Is 'Ready To Make' Another JUDAS PRIEST Album

Only four months after the release of JUDAS PRIEST's latest album, "Redeemer Of Souls", the band's lead singer, Rob Halford, says that he is ready to head back into the studio to begin work on the follow-up effort.

JUDAS PRIEST's 17th studio album, "Redeemer Of Souls" came out six years after the critically panned 2008 concept double disc "Nostradamus", which was compared in one review to "old men trying to put on a pair of new leather pants that don't fit, but nor do they have the dignity to not wear them."

The new CD, which was described by guitarist Glenn Tipton as "a completely classic PRIEST album," sold around 32,000 copies in the United States in its first week of release to land at position No. 6 on The Billboard 200 chart.

Speaking about PRIEST's future during a November 3 appearance on Eddie Trunk's "Trunk Nation" show on SiriusXM's Hair Nation, Halford said: "I go into the dressing room every night [during the current North American tour], and [JUDAS PRIEST guitarist] Richie's [Faulkner] jamming; that guy never stops playing his guitar. And I walk in, and I go, 'What are you playing now?' [And he says] 'I don't know.' [And I tell him] 'Put that down in your iPhone right now.' And he gets his iPhone and puts it down. He's been doing that all the way through the 'Redeemer Of Souls' tour. So what I'm saying is the riffs are already piling up, the ideas are already piling up. I'm ready to go. I'm ready to make a JUDAS PRIEST record. So that's where we roll at the moment."

Founding JUDAS PRIEST guitarist K.K. Downing announced his retirement from PRIEST in April 2011. He has since been replaced by Faulkner, most recently guitarist in the backing band for Lauren Harris (daughter of IRON MAIDEN bassist Steve Harris).