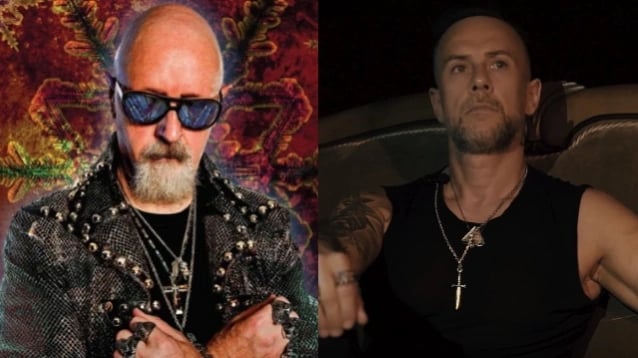 ROB HALFORD Says His Collaboration With NERGAL Will 'Definitely' Happen

Halford has long spoken about wanting to work on a black metal album, with initial discussions between him and EMPEROR's Ihsahn taking place back in 2006. More recently, Rob has said that he met Nergal and told the BEHEMOTH leader that he loved his music and expressed an interest in a possible collaboration.

Asked in a new interview with Elliott Fullam of Little Punk People if the Nergal "jam" is "still possible," Halford said (see video below): "I love Nergal so much. He's so fierce. He's so in his world, and I really admire that in any musician that has that conviction. It's something that it's always there — you know, this backburner thing. It's on the bucketlist, however you wanna call it. It's definitely gonna happen. Just for me as a singer, I've always admired that kind of performance, the way Nergal uses his voice. So one day there'll be a duet with Nergal and The Metal God. It's gonna happen."

Two years ago, Nergal said that it felt "surreal" and "amazing" to know that Halford is a fan of BEHEMOTH. "I feel flattered and honored," he said. "I met Rob a couple of times. Actually, I'm gonna tell you the story how I met him the second time. It was the last SLAYER show [of the North American tour], and we were just running from room to room, signing each other's posters and all the memorabilia and stuff. And I'm just rushing into SLAYER's room without even knocking on the door, because that's how chaotic the whole day looked like. And I'm just entering the room, and it's quiet. There's, like, 10 people — all the bandmembers, like SLAYER — and Kerry King [SLAYER guitarist] is standing next to Rob Halford and they're watching something and it's quiet. And I'm, like, entering the room, like, 'Sorry.' And I backed off. And then I was, like, 'Oh, shit. Ah, fuck. I'm re-entering.' And I just re-entered, just pretending it's natural circumstances for myself. 'Hi, what's up?' [Laughs] And I approached them to say hi to Rob, and Kerry was, like, 'Yeah, we were just watching a clip from you jamming with us a SLAYER song. It's cool.' And I was, like, 'Holy fuck!' I was starstruck. I love it. It's awesome."

Nergal added: "Thank you, Rob. Thanks for being The Metal God, and thanks for supporting… you know, small fish as well. [Laughs]."