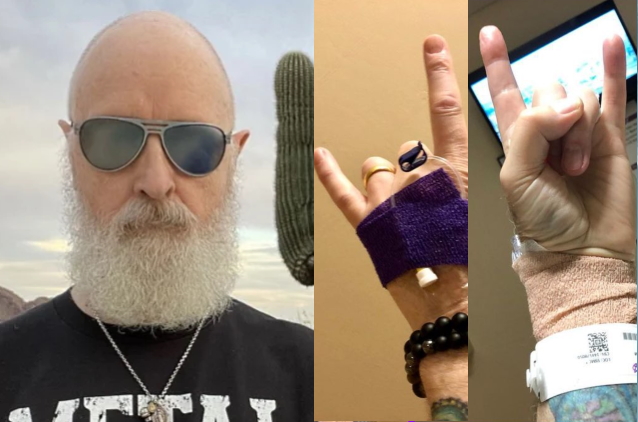 During an appearance on a recent episode of the "Prostate Cancer Uncensored" podcast, JUDAS PRIEST singer Rob Halford spoke about his decision to go public with his battle with prostate cancer. Asked by podcast host and TWISTED SISTER guitarist Jay Jay French — a fellow prostate cancer survivor — when he first got diagnosed by the disease, Halford said (as transcribed by BLABBERMOUTH.NET): "My PSA [prostate-specific antigen] levels were starting to get elevated many, many years before I finally had a checkup with my doctor. And he took the blood tests and he goes, 'Man, these numbers are really high. I'm gonna take you to my guy.' I wanna say it was close to 10 years [ago] when my PSA levels were starting to get elevated. I was living in San Diego at the time. And my doctor there, he, as well, said, 'Rob, we need to keep an eye on this. I don't like the look of these numbers. Can you come in and see me, and we'll run some tests?' So this is on the eve of a big world tour. So what do you do? 'Yeah, doc. I'll just get this tour completed and I'll come and see you.' So, as you know, Jay, when we go on these world tours, they can take a year, two years, three years to complete, so through that whole touring process, I never got the follow-ups that I needed to get done, done.

"And let me quickly say that it's a guy thing, right? It's a guy thing," he noted. "I'm a 70-year-old metalhead. I come from a generation when men, we didn't talk about these kinds of things. We never really talked about our health. We always found it difficult to open up emotionally, let alone anything else. So on top of all of the things that I was dealing with on the road and having a great time, I knew this was lurking in the back of my mind.

"Anyway, so we're talking — what? — about three years back now maybe. I see my new doctor in Phoenix, and he runs the tests again and he goes, 'I've gotta get you in to see my guy.' And that's when this incredible journey started for me to battle the prostate cancer."

Regarding how he processed his prostate cancer diagnosis and whether he chose to keep it to himself for a long time before sharing it with those closest to him, Rob said: "I'm a gay. [Laughs] We gays, we throw it out — we throw it out. That might sound a little bit odd, but part of my personality and my sexual identity has just given me this… I don't hold anything back. And part of my sobriety is living your day in the most truthful and honest way that you see fit for yourself. Sure, if you don't wanna share some things, you don't have to. But I looked upon this whole experience as something that I really wanted to put out. Having said that, we did keep a lid on it for the band, for the business side of things until the appropriate moment came along for me to discuss it.

"You probably noticed, Jay, in recent years that, again, these issues of health — cancer, for example — musicians talk more openly about the health challenges that they're going through. So I was trying to make the timing work; I was trying to make it happen that was comfortable and beneficial to everybody," he added. "But initially I was telling everybody — my immediate family, my immediate close circle of friends — just because for me that was therapy. That was therapy."

Halford went on to say that beating cancer has made him appreciate being in JUDAS PRIEST even more than he did in the past.

"The health side of life is so important," he said. "And after having gone through what I did, I'm grateful and blessed to be able to do the work [with the band]. And as a result of going through the recovery process and the stars aligning and the calendar being in the right place, I was able to go out there and do my work now probably with even more intensity, because, man, to come through the other side of that challenge was, without a doubt, a life changer.

"I've always lived life to the max — every day of my life," Halford added. "It's so important for me to get even the smallest thing out of the day, whatever it might be. So to be in this opportunity is just an extra boost, man. You feel that even more now when you go out on stage and you're so grateful to be able to continue doing the work that you love."

Rob previously discussed his cancer battle this past April during an appearance on an episode of Full Metal Jackie's nationally syndicated radio show. Regarding his decision to mention his illness in the new chapter added to the updated paperback edition of his autobiography "Confess", he said: "I think it was important [to talk about it], because for everybody it's incredibly scary. The first thing my guy doctor told me, he goes, 'You've got cancer. I'm gonna take your prostate out. Come with me to this other room.' And my world starts really... 'Oh my god. I've got cancer...' I think that's a very natural reaction. And he goes, 'Have you got a question?' I go, 'Am I going to die?' He goes, 'No, you're not going to die. I'm gonna do this. I'm gonna do this.' They're so positive and they're so reinforcing yourself through those early few days of understanding your condition.

"And I'll tell you something, as I said in the book, I felt so terribly selfish, because [I thought], 'Oh God, I've got cancer. I've got cancer.' And then I see these commercials for Phoenix children's hospital and these little kids — little kids — with cancer fighting for their lives. And I go, 'For God's sake, you got so far in your life and you've got this to deal with and you've got the most incredibly talented people to look after you and make you well.'

"So it was a readjustment for me," Rob said. "I was really, really ashamed of myself to have that kind of perspective. But I pushed through that, and then I just got on with the job that needed to be done. And yeah, we went into gory and amusing details in that edition of 'Confess'."

Halford went on to say that cancer treatment has improved dramatically in recent years and that fewer patients die of cancer than ever before.

"As a younger person, the 'C' word [cancer], as it used to be called, for a lot of people, the outcome was gonna be remarkably different to where we are today," he said. "It's just fantastic, the way that the improvements and the way that people are treated now. It's given everybody many, many greater chances of living long, healthy lives. And so we should all be grateful for that."

In "Confess", Halford revealed that he was diagnosed with cancer after experiencing symptoms for at least a couple of years.

Halford's cancer battle is one of a number of health scares the members of PRIEST have had to deal with in recent years. Last September, guitarist Richie Faulkner suffered an acute cardiac aortic dissection during the band's performance at the Louder Than Life festival. Faulkner was rushed to the UofL Health - Jewish Hospital where the cardiothoracic surgery team needed approximately 10 hours to complete a life-saving surgery.

PRIEST guitarist Glenn Tipton was diagnosed with Parkinson's disease eight years ago — after being stricken by the condition at least half a decade earlier — but announced in early 2018 he was going to sit out touring activities in support of the band's latest album, "Firepower". He was replaced by "Firepower" producer Andy Sneap, who is also known for his work in NWOBHM revivalists HELL and cult thrash outfit SABBAT.