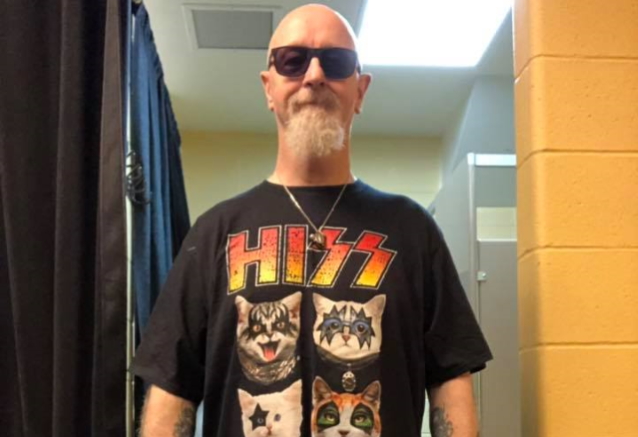 Kitten Rescue is a non-profit, volunteer-run organization devoted to finding loving homes for unwanted, homeless cats and kittens. Kitten Rescue saves cats and kittens from the streets of Los Angeles and from city shelter euthanasia. Since their start in 1997, they have grown into one of the largest, most well-respected animal welfare groups in L.A. Other notable rock icons such as BLACK SABBATH bassist Geezer Butler and his wife Gloria, OZZY OSBOURNE bassist Robert "Blasko" Nicholson, legendary DEEP PURPLE bassist/vocalist Glenn Hughes and his wife Gabi, as well as BLABBERMOUTH.NET are some of the organization's loyal supporters. None other than Halford and Elvira, "Mistress Of The Dark", have lent their image in support of Kitten Rescue.

Kitten Rescue's first in-person "Fur Ball At The Skirball" gala since the pandemic will be held this Saturday, October 8 at the Skirball Center in Los Angeles. The event will celebrate the history of the organization which started as a small grass-roots network to save kittens that would otherwise be immediately euthanized at shelters. Hosted by radio and TV personality Mark Thompson, the gala will be a night of nostalgia and inspiration, comedy and entertainment. At the event, Kitten Rescue will honor actress Miranda Cosgrove with the Angel Award for her dedicated hands-on work in saving cats in her community and for her advocacy. Celebrity attendees will include Nathan Kehn and Jackson Galaxy.

"Fur Ball At The Skirball" is Kitten Rescue's largest fundraiser of the year. Its success direct impacts the organization's ability to fulfill its mission to save the most vulnerable felines of Los Angeles — neonates, undersocialized cats, medical cases and special-needs kitties. With a kitten season in Los Angeles that lasts for most of the year, there are thousands of felines at risk each year and Kitten Rescue wants to save as many as it possibly can.

Kitten Rescue has saved well over 30,000 cats and kittens since its inception.