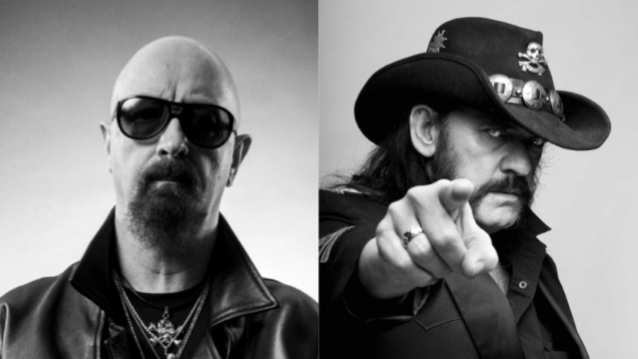 ROB HALFORD: 'There Should Be A Book Of LEMMY Quotes, Because He Never Held Back'

To celebrate the life and times of MÖTÖRHEAD's iconic leader Ian Fraser "Lemmy" Kilmister, who passed away exactly six years ago — on December 28, 2015 — Revolver recently reached out to musicians who knew and/or admired him, including his old friend Rob Halford of JUDAS PRIEST. Speaking about his relationship with Lemmy, Rob said: "On a friendship level, I was always a little bit in awe of Lemmy because he was — and still is — this larger-than-life persona. When you talk to anybody about Lemmy, you see this mental picture in your head — the guy in the cowboy boots and the jeans and the bullet belt and the leather jacket and the mustache. His physical characteristics are really, really pronounced, so you've got all that wrapped up in his persona, as well."

Halford went on to say that people admired Lemmy as much for his attitude as they did for his music. "There should be a book of Lemmy quotes, because he never held back," Rob said. "That's what I loved about him. He epitomized this great virtue in rock and roll, which is not only music but speaking your mind. He always had an opinion on any matter in life, and it was always Lemmy-esque. [Laughs] He had a very unique way of looking at the world because he was a very smart man. He was a total bookworm and he loved his war history and memorabilia. His very astute way of talking and thinking made him remarkable."

Last month, Halford told the "SpeedFreaks" radio show that he was one of a number of Lemmy's close personal friends and associates who received bullet casings filled with his ashes after his death as a personal gift. He said: "When Lemmy passed away, I had this beautiful opportunity to speak at his memorial. We had a great get-together; all of us musicians from all over the world, we met in Hollywood and we talked about Lemmy and his great life and the things that he's left us. And then, not too far back, I get something in the mail from the Lemmy people; Lemmy's office, his manager and everybody still work tirelessly to keep his name with us, as he always will be. They sent me — it's a bullet [laughs], it's a bullet with some of Lemmy's ashes inside of it."

He continued: "This is nuts. This is the kind of thing that Lemmy would have loved to have done. However you choose to interpret what I've just said, that's entirely up to you. But to be thought of, to be brought into this small circle of friends where you actually own a little bit of Lemmy's ashes and you wear it around your neck on a pendant and he's close to your heart in the truest sense in terms of his mortal remains, that's just mind-blowingly powerful. To use an object like that to carry his remains is just soLemmy — it's provocative, it makes you think, it makes you talk. But as far as having a beautiful part of Lemmy physically with me right now in my house, that's just magical."

Lemmy died at the age of 70 shortly after learning he had been diagnosed with cancer.