ROB ZOMBIE and KORN will embark on a Live Nation-produced co-headlining amphitheater tour, dubbed "Return Of The Dreads", this summer. The two influential bands will kick off their tour this July and will visit 25 North American cities, including Austin, Los Angeles, San Francisco, Toronto, Seattle, Las Vegas and more. IN THIS MOMENT will join the tour as special guests.

All dates, cities and venues below subject to change.

Note: The Boise and Dallas shows are **NOT** part of the BLABBERMOUTH.NET presale.

* In addition to regular ROB ZOMBIE and KORN single ticket options, fans in these markets will have access to a special three-show Ticket To Rock which will include a lawn ticket to each of the following three shows in each participating market: KORN and ROB ZOMBIE; SLIPKNOT with MARILYN MANSON; DISTURBED and BREAKING BENJAMIN.

"IN THIS MOMENT is thrilled to be a part of the BIGGEST tour of the summer!" said the band in a statement. "We are longtime fans who are continuously inspired by both ROB ZOMBIE and KORN, so to be a part of this tour is a dream come true for us! North America, prepare to have your faces melted and your minds blown! This show is going to be pure insanity. Don't miss out!"

The album's first single, "Well, Everybody's Fucking In A U.F.O.", made its radio debut last month.

KORN is working on material for a new album, tentatively due in the fall. A producer has already been selected for the effort but has not yet been announced.

IN THIS MOMENT signed with Atlantic Records in 2013 after completing its contract with Century Media Records. 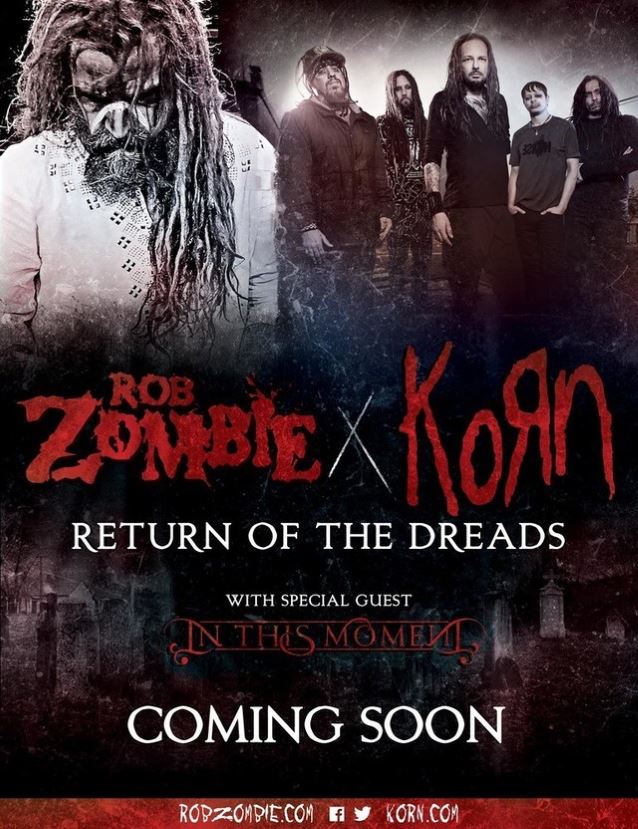