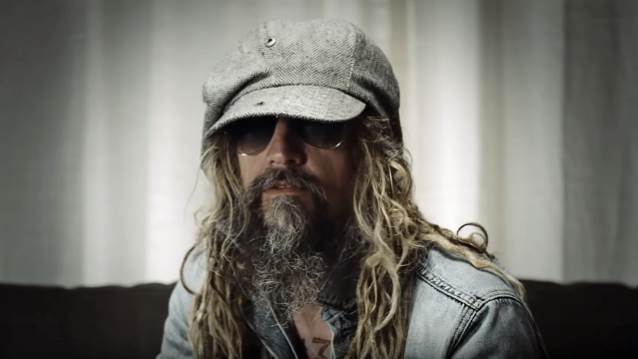 ROB ZOMBIE Doesn't Believe SLAYER's 'Retirement' Is Permanent: 'After Two Years, They're Gonna Be Back On The Road'

Jason Rockman of Montreal, Quebec, Canada's CHOM 97.7 radio station recently conducted an interview with Rob Zombie. You can now listen to the chat below.

Asked if he ever thought he would still be touring and performing more than 30 years after the formation of his previous band, WHITE ZOMBIE, Rob said: "I don't think anyone ever thought they would be doing it this long. Just a couple of days ago, I was hanging out with Alice Cooper, 'cause he was at the Rock And Roll Hall Of Fame and I just dropped by to say hi. He's 70, and he has no plans of retiring. I mean, Jesus Christ, Jerry Lee Lewis hasn't even retired yet.

"No rock guys have ever retired — they just… they died; that's why they retired," he continued. And when I hear, 'Oh, SLAYER are retiring,' I go, 'No fucking way! No way!' They think they wanna be home and have a life. After two years, they're gonna go cuckoo and they're gonna be back on the road. That's what we're all built for — we're all crazy and we need to do this. And I don't know why. And I don't see any retirement ever. We'll keep going until we can't go anymore.

"The only time I said I would retire is when I thought I just can't do it anymore and you know you're not good — you know the shows aren't good, you know you can't bring it," he added. "But until then, yeah. And time goes by fast, too."

Rob went on to say that he feels "better now performing" than he did 30 years ago. "I don't even get tired anymore," he said. "It's fine. I mean, I would feel more wiped out 20 years ago playing than I do now.

"I think when you're young, because you are young, you can treat yourself like shit and still do the show," he explained. "But now, everything I do is with being fit and healthy to do the show, so we actually can do it better.

"I was watching some footage of Mick Jagger from a recent [THE ROLLING STONES] show. He's 74, and he's amazing. Of course, he looks old. Who gives a shit? And you look at Ron Wood — he looks like the same guy, except he looks like an old version [of himself]. It's kind of cool. And Iggy Pop."

According Rob, people are surprised to see so many old musicians still rocking out because "no one ever saw it happen before." He added: "We thought, 'Oh, rock stars are young and cute, and then they die at 27.' But there's something cool about these… They look like they've been through the war — these battle-scarred maniacs on stage; there's something kind of cool about it."

*EXCLUSIVE* Cross this one off the bucket list! I had a one on one chat with Rob Zombie!! See him at HEAVY MONTRÉAL !! ~ Jason Rockman ( Photo by Susan Moss)