The music lineup, along with food and beverage highlights have been announced for the third annual Monster Energy Rock Allegiance festival, set to take place Saturday, October 7 at the festival's new location at BB&T Pavilion and Wiggins Waterfront Park in Camden, New Jersey.

The Northeast's biggest rock experience will feature over twenty bands on three stages, along with mouth-watering, Philly-centric food offerings, regional and national craft beer, band meet-and-greets, autograph signings, and more for fans from around the country to immerse themselves in rock and roll culture.

The current music lineup for Monster Energy Rock Allegiance is as follows:

Zoltan Bathory of FIVE FINGER DEATH PUNCH said: "Rock Allegiance has become a staple on the U.S. festival circuit. It's one of the coolest festivals out there for fans to discover new music and see their favorite bands live. We are excited to return this year to see our friends and fans in Philly. Don't miss it! It will be another great one this year."

Lzzy Hale of HALESTORM commented: "We are so excited about being a part of Rock Allegiance 2017! We've been busy writing new music for our next record and have been missing the stage. We cannot wait to see all of you and give a loud offering to the rock 'n' roll gods!!"

Tickets for Monster Energy Rock Allegiance will go on sale Wednesday, May 24 at noon ET at RockAllegiance.com and LiveNation.com.

"We are honored to be working with DWP again as we welcome Rock Allegiance back to the area for its third year," said Geoff Gordon, Live Nation Philadelphia regional president. "And we couldn't be happier that they chose BB&T Pavilion and the Delaware River Waterfront as the festival's new home."

General Admission and VIP tickets will be available for purchase starting Wednesday, May 24 at noon ET, starting at the following prices:

During the first portion of the festival, all seating will be general admission. For the headlining four bands, the Main Stage / Pavilion will be assigned seating based on the ticket purchased. 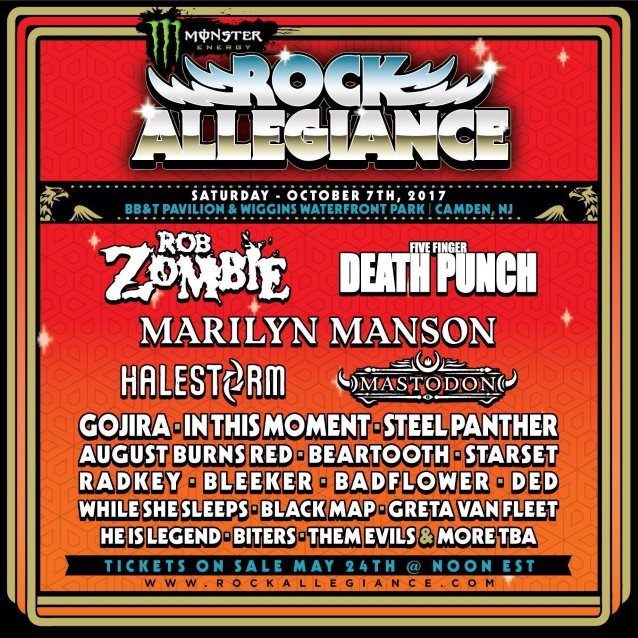