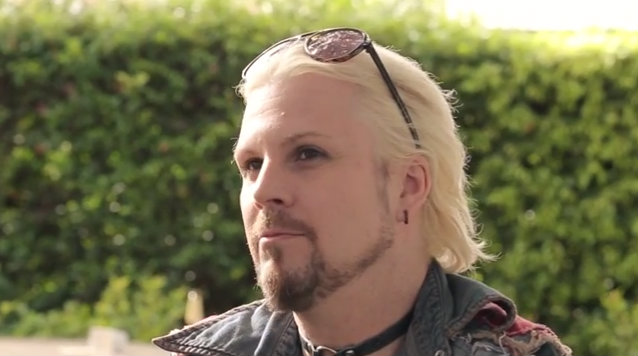 Emmy Mack of SF Media conducted an interview with ROB ZOMBIE and ex-MARILYN MANSON guitarist John 5 (real name: John William Lowery) on February 23 at the Sydney stop of this year's Soundwave festival in Australia. You can now watch the chat below.

John 5 recently spoke to Metal Obsession about his forthcoming solo album, "Careful With That Axe", due out later this year. "I'm working on it and just mixing it right now," he said. "It is crazy. If people liked my earlier work, you're going to be really excited about it. It's really intense. It's, like, when you listen to it, it's, like, 'What just happened?', which is one of the songtitles. It's really exciting. I can't wait for people to hear it."

In a September 2013 interview with Artisan News, John 5 stated about his next CD: "I've got Elton John's bass player doing stuff. I mean, I have a bunch of guest stars on this one, so it's gonna be really good."

Regarding how his upcoming album will be different from his last effort, 2012's "God Told Me To", John 5 said: "The last one was half acoustic, half electric and I always like to change it up, so this one, I'm just gonna have a bunch of guest stars. So I'm gonna start asking my friends for favors and all this stuff. 'Hey, come on in. I watched your house and I let your dog out that one time, so come play on my record.' So I'm gonna start my long list of people to come and play. I think it's fun."

He continued: "These albums are a lot of fun. I just do 'em for the love of guitar and to inspire a couple of people on the way… I just really enjoy doing that. It's great. It was one of the smartest things I've ever done. Right when I left MANSON, I was, like, 'OK, so I guess I'll finally make my instrumental record.' And it did really well, and I'm on my sixth one. And I don't do them for money or anything — I just do them for the love of the guitar — and I think the audience really can see that. I'll do something like a Chet Atkins song and then some crazy death metal-type song. So it's a very wide range of music; there's no format and there's no rules."