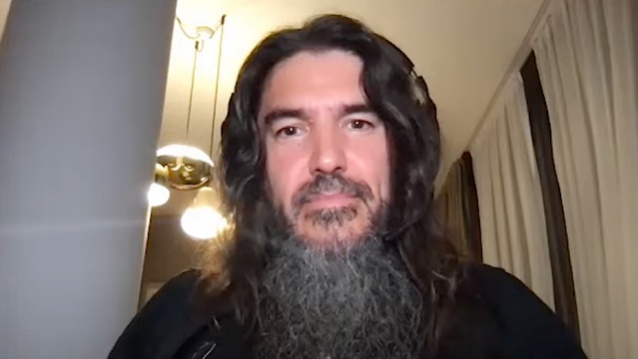 ROBB FLYNN On Keeping MACHINE HEAD Going For Three Decades: 'To Me, It's Always Been About The Music'

In a new interview with Metal Injection, MACHINE HEAD founder Robb Flynn spoke about how he has been able to keep the band going for 30 years, having weathered a number of lineup changes and the fickleness of the music business. He said (as transcribed by BLABBERMOUTH.NET): "I think one of the hardest things, when you're in a band, is it's very easy to get caught up in the music business. You can get competitive. And there's nothing wrong with a little bit of competitive spirit, but you can get focused on your career — you know, 'My career.' I've never agreed with that. I think that you've gotta just focus on the music, and you've gotta just explore the music. And as long as you can kind of never lose track of that and always kind of stay on sight… I mean, it's easy to get kind of… I'm an artist. I can be emotional. I get bored doing the same thing twice. I wanna go into the wilderness and get lost [laughs], and I like that.

"I've never focused on my career," he explained. "To me, it's always been about the music — just writing music. I heard a quote a long time ago from [legendary basketball player] Michael Jordan that really has stuck with me, and it's kind of been a guiding light, if you will, for me in times when I wasn't certain if we should do something or where we should go. And basically the quote was, 'You don't have to love the NBA. You just have to love the game of basketball.' And the way I interpret that for my situation is I don't have to love the music business and all the politics and all the bullshit that goes along with it; I just have to love music. And as long as that's where my heart is and that's where my guiding force is, then I'll be good."

Flynn went on to say that he considers himself "lucky" to be able to do what he does. "I'm in Vienna, Austria right now doing pre-production for my arena tour that I'm about to do," he said. "It's crazy and it blows my mind. You can't take it for granted, and you've gotta appreciate it. And I've been very lucky. Sure, I've got some talent, and I'm a really good songwriter, but a lot of things had to align for all of that to work. And so, yeah, you've just gotta be grateful. And put it out to the world, like, 'I'm fucking grateful.' I think people sometimes feel that way, but you've gotta put it out into the world. And I'm not saying that I was always like that. There was plenty of times when I couldn't even say 'thank you' for something that people did. Over the time, that's what I've learned. And the more you put it out into the world, the more it comes back to you. It's wild to think that that's the way that it is, but it is. You get back what you put out to the world."