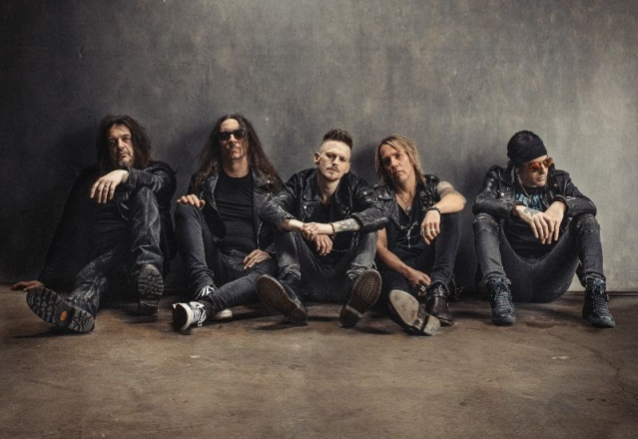 In a new interview with Artists On Record Starring ADIKA Live!, SKID ROW bassist Rachel Bolan spoke about Swedish vocalist Erik Grönwall, who joined the band earlier this year as the replacement for ZP Theart. He said (as transcribed by BLABBERMOUTH.NET): "He just blew us away, and he continues to blow us away. Not only is he a great singer, but his talents go further. He's the first singer we ever had that plays guitar, and he plays it well. And he writes — he's a really good songwriter — which is awesome. We love it. It's just more creativity within the five of us."

Referencing the fact that Erik was diagnosed with acute lymphoblastic leukemia in March 2021, Bolan went on to praise the singer's "outlook on life, because he has a different outlook now than the rest of us have. He probably appreciates it — I'm not even gonna say 'probably'; he definitely appreciates it more than we do, doesn't take anything for granted," he said. "His work ethic is just like ours where it's, like, 'Well, we're not gonna stop until it's done right or the way that we think is exactly how we want it.'

"As you could tell, I'm very excited about it, and we all share the same excitement," Bolan added. "I hear people say this one line a lot since he joined the band, and it couldn't make me feel any better. But people are saying, 'SKID ROW is back.' And when I hear that, it's comforting, one, and two, it's just such a powerful statement to hear when you're in the band, because you're, like, 'Well, we didn't really go anywhere,' but then you realize, 'Okay, now we hit the jackpot.' We got a guy that works as hard as we do, wants it as bad as we do and takes pride in his work like we do. … We dig working together and we have a lot of laughs, which, as you know, being in a band, is so important. And having five like-minded people is super important, especially at our age. Everyone has to have the same goal in mind, whether it's a huge goal or a smaller goal. And it helps — it really helps — with just moving on and moving forward."

Theart had been in SKID ROW for more than six years. He played his final gig with SKID ROW in February before being officially given the boot.

In September 2021, Grönwall announced that he was cancer free after receiving a bone marrow transplant one month earlier. "Some anonymous wonderful human being somewhere in the world donated his/her blood cells so that I could get a second chance at life," he told Headbangers Lifestyle in January. "Sometimes I can just get tears in my eyes when I think about it. It's so beautiful that one person who is not connected to me in any way wanted to do that for me. He/she doesn't know that the blood cells were for me. It's completely anonymous."

Bolan reflected on SKID ROW's first live performance with Grönwall in a recent interview with Meltdown of Detroit's WRIF radio station, saying: "Honestly, dude, from the minute he opened his mouth… His timing is impeccable. We knew it was gonna be cool. And each show has gotten even better, 'cause we're learning each other's rhythm on stage. When I walked away from that show, I said to Erik, I go, 'This was show one. I cannot wait for show one hundred. It's gonna be amazing.'"