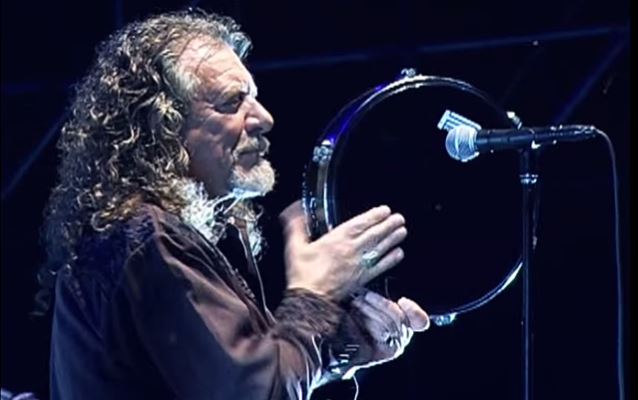 According to The Pulse Of Radio, Robert Plant has been getting great notices for his recent shows with his SENSATIONAL SPACE SHIFTERS along with their work on the band's debut album "Lullaby And… The Ceaseless Roar". Plant spoke to Relix magazine about his current music and how it connects to his early days in LED ZEPPELIN, explaining, "I want people to know I'm pulling points of reference from other times and other places — incongruous and out of step and kilter — into another world. I've done it with ZEPPELIN lyrics, as well — 'if the sun refused to shine' and 'the road remains the same' and all the shit. There's so many bits like that, because I like the idea of spinning the bottle. And if one or two people pick up on it, that's the justice — that's about right."

In regards to recording, Plant admits that his studio process in tracking vocals has remained unchanged: "I think, quite often, the first two vocal takes are all I need. Whether it's good or bad, I don't care. It was the same with ZEPPELIN, really — 'In Through The Out Door' or 'Physical Graffiti' — there's so many places I could've done better, but I'd have lost the feel, you're closer to the all the great god up there — (Howlin') Wolf and Charley Patton and Mario Lanza and all that stuff. You've got to get up there and reach for it, and have the essence still on board."

Despite his public misgivings about reforming LED ZEPPELIN as a live act, Plant can't deny the power and quality of the band's classic works. "When I hear the ZEPPELIN records now, they've been hawked and whored to such a degree that you start to wonder what in God's name is going on. But then, when you hear it in isolation, in one minute of calm quiet, you remember what the actual spell was and how it was cast."

Robert Plant has always taken pride that regardless of the era and its influences, he always meant whatever it was he was singing. "I just get into songs and live 'em out," he said. "And I think that's true. All I do is get into great songs."

Robert Plant and his SENSATIONAL SPACE SHIFTERS will next perform on March 13 in Mexico City, Mexico.

On April 25, Plant and Alison Krauss will be among the headlining artists scheduled to perform at Lead Belly At 125: A Tribute To An American Songster. The event is being organized by the Kennedy Center and Grammy Museum.

Plant's next SHAPE SHIFTERS U.S. date is set for May 30 in Napa, California at BottleRock Napa Valley at Napa Valley Exposition. After that, the band will play on June 5 in Hunter, New York at the Mountain Jam festival at Hunter Mountain.