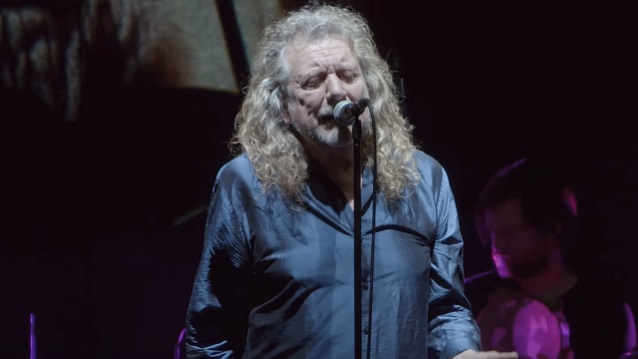 ROBERT PLANT & THE SENSATIONAL SPACE SHIFTERS have released a performance video for the title track of their latest album, "Carry Fire". The clip was filmed on November 30, 2017 at the O2 Apollo in Manchester, England. It was directed by Ryan Mackfall and produced by Crashburn Media.

ROBERT PLANT & THE SENSATIONAL SPACE SHIFTERS kick off their 12-city North American tour tonight (February 9) at Raleigh, North Carolina's Raleigh Memorial Auditorium. Plant and the band are touring in support of "Carry Fire", with the trek stretching through March 2, when it wraps at L.A.'s Orpheum Theatre.

Released today on DVD and digital video is ROBERT PLANT & THE SENSATIONAL SPACE SHIFTERS "Live At David Lynch's Festival Of Disruption". The eight-song performance was captured on October 8, 2016 at L.A.'s Ace Hotel Theatre as part of David Lynch's inaugural Festival Of Disruption, which raised money for The David Lynch Foundation. In addition to newer solo material, Plant dips into his LED ZEPPELIN back catalogue with updated takes on such classics as "Black Dog", "Babe, I’m Gonna Leave You", "Going To California" and a medley of "Hoochie Coochie Man / Whole Lotta Love / Mona".

Robert Plant explained to The Pulse Of Radio that the truest expression of his musicality today can be summed up by the work he does with SENSATIONAL SPACE SHIFTERS. "The biggest joy is to get it right — to feel that you got it right," he said. "The whole thing, it's like a weave, because it's not the kind of... what people would expect. I've made a lot of music in Nashville and I've worked a lot with... [I've] modified my singing style quite a lot to fit in with another process. So, the music that I made with Alison Krauss and with the BAND OF JOY was more reflective. And when I came back to the U.K. recently, I just missed these guys and the way that they — they're coming from great places, y'know? It's strong urban British music."