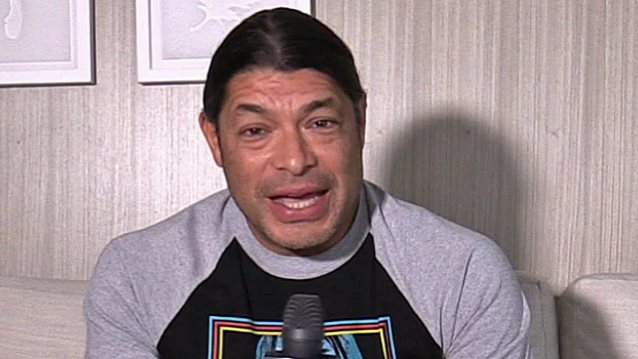 ROBERT TRUJILLO: 'Hardwired' Is 'Probably One Of The Best-Sounding METALLICA Records Ever'

METALLICA bassist Robert Trujillo was interviewed by A Music Blog, Yea? after the band's concert in Toronto, Ontario, Canada at the end of November. You can now watch the chat below.

Speaking about the making of METALLICA's latest album, "Hardwired… To Self-Destruct", Trujillo said: "Well, each album is different; it's really its own sort of work of art in a lot of ways. And with our fans, a lot of times, people get upset because maybe they didn't get what they wanted, whatever. But we always write the songs for us, number one. And the thing is that creatively, we're in a place right now, we're having a really good time and we're having fun. And when we put on our guitars, it's just like we're teenagers again, and that's where ultimately the magic is. The song ends up what it ends up being, but the enthusiasm is there, and I think that's what people are feeling in this new record. Also, the production, the sonic value of what it is and where it's sitting, sound-wise, I think, is really great. I mean, I can honestly say, for me as a bass player, I love the sound of this record. It's probably one of the best bass sounds I've gotten in a very, very long time, and probably one of the best-sounding METALLICA records ever. I mean, really. It's that amazing. And this is my only opinion — of course, everyone can say what they want — but I've heard it from a lot of people. It's, like, 'Man, that album sounds killer,' just sonically. So, for me, that's exciting, because it means that with our producer, Greg Fidelman, we're launching off here for a journey that could last a little while, or a long while. I don't know. But the good thing is that there's momentum, and it's creative, and it's not just the momentum of going on tour, which is all very exciting. And we feel that, especially after eight years, and it's something new. But, again, it's just this creative thing and the possibilities of where we can go with that and what we're moving towards."

Trujillo also talked about the increased emphasis on groove on "Hardwired… To Self-Destruct" compared to 2008's "Death Magnetic". He said: "What we do is the riffs, wherever they come from, on this album, a lot of James Hetfield, a lot of Hetfield riffs, which is great, 'cause I always feel that… We say that you can't go wrong with a James Hetfield riff; they're just so awesome. And what I found is, on this album, there's definitely that element of groovability. Whether it's a fast song, or a medium-tempo song, or whatever, there's certainly this groove, this feel, that I think is important to all these songs. And it's always nice, no matter what style of music, as long as it's grooving, and you feel that, I feel that's what makes… part of what makes a great song, for sure."

The album consists of two discs, containing a dozen songs and nearly 80 minutes of music.