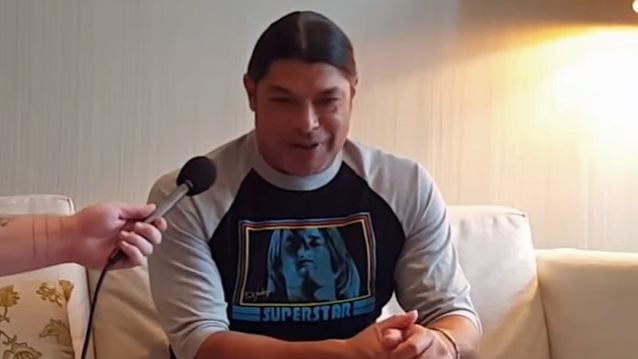 Drew Dalby of the 104.9 The Wolf radio station spoke to METALLICA bassist Robert Trujillo about the band's new album, "Hardwired… To Self-Destruct", on November 30 in Toronto, Ontario, Canada. You can now watch the chat below.

Asked if he still gets the "butterfly feeling" every time a new record comes out with his playing on it, Trujillo said: "Yeah. I mean, you always do — especially when you really enjoy what you did, what you recorded, and how it sounds.

"With our producer, Greg Fidelman, it was really a joy to work with him and to try different things and experiment. You're taking this journey together, and it seems long-winded at the time, but then when it's all over and… You never realize that someday it's gonna be over, but when it is over, and then you embrace that there's success with it and people actually are enjoying it, it is gratifying.

"It takes a long time for METALLICA to make records and it's a bit of a process, and this one took eight years… I mean, it's not like we worked on the album for eight years; we really focused on it for the last couple of years.

"I'm proud of the bass sound and the drums, and I'm really proud of James's [Hetfield] vocals and the production. Everything just really sits well and fits together.

"I feel, and this is my opinion, and I've heard it from other people, this is really one of the best METALLICA sounding albums, sonically, ever. And that really comes a lot from… I mean, of course, how we're playing, but also just our producer and his commitment to sound and really getting in there and being a part of every experience in recording this thing. Not kind of phoning it in, not, you know, 'Okay, it's just bass tracks. You don't need me. The assistant will do it.' I've been in those situations. 'The assistant engineer can cover this,' or whatever. No. It was, like, [has] to be there, has to do this. There's a lot involved when you've got that much responsibility and attention to detail. So this is exciting times, 'cause it's really in a lot of ways for me…

"You know, my first creative experience with METALLICA was 'Death Magnetic', and this is sort of the second step to that. And I'm already inspired for the next step, you know what I mean? I'm coming up with ideas already, 'cause it feels good, it feels right, and it's exciting to have a producer like Greg Fidelman on board with us now."

Trujillo also expressed his confidence that METALLICA fans won't have to wait as long for the follow-up to "Hardwired… To Self-Destruct". "I personally won't let it be eight years," he said. "You know, between 'St. Anger' and 'Death Magnetic', we had, if I'm not mistaken, five kids born. And, of course, that would allow things to take time. And then, with this eight-year cycle, we had done a film called 'Through The Never', we made an album with Lou Reed, which was very important and special to us. We also did some interesting tour cycles. We played the 'black' album in its entirety, we actually played a song called 'Frayed Ends Of Sanity' last summer off the 'Justice' album, which seemed like an impossible task for the longest time. And we hit it, we attacked it. So where we're at, at our age, in our careers, I like the fact that we are challenging ourselves, and, to me, that makes for a better album. And all those complaints about, 'It took so long. We've been waiting. Finally! Finally!' It's, like, it did take a long time, but at least we got this and this and this done, got it out of our system, and that has made this album, I feel, better and special, and now, yeah, you don't have to wait so long. We're getting better."