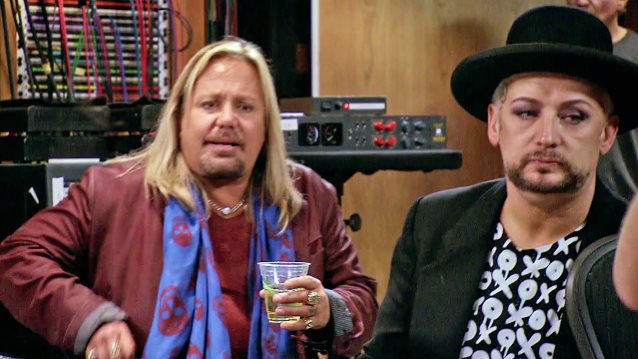 MÖTLEY CRÜE singer Vince Neil is among the celebrities competing on NBC's "The New Celebrity Apprentice", which shifts to Los Angeles for its eighth season where twice-elected California governor, successful businessman and international movie superstar Arnold Schwarzenegger takes control of the boardroom. "The New Celebrity Apprentice" will premiere on January 2 and will air weekly on Monday nights at 8 p.m.

"The New Celebrity Apprentice" sees contestants compete in teams to complete business challenges from developing an advertising campaign to putting together promotional events. The winner for the season receives a check for $250,000 for their charity while they also have the ability to win additional money for their cause in various challenges throughout the season.

After being divided into two teams, men vs. women, the celebrity contestants get their first task from their new boss and his business advisors, Tyra Banks — supermodel, producer, accomplished businesswoman and CEO of the Tyra Banks Company — and Schwarzenegger's nephew, prominent entertainment attorney Patrick Knapp Schwarzenegger. Each team has to create a 10-minute Tyra Beauty experience, showing how fun, fast and fierce the make-up products are before heading to the boardroom to hear which team won, which team lost and who from the losing team will be the first one heading home.

In the second episode, the celebrity contestants have to create an original song and video for Trident's "Cherish Your Teeth" campaign, and will be judged on creativity and entertainment value by boss Arnold Schwarzenegger and his two advisors. While a misstep on one team costs precious time, disagreements flair up on the other team, creating drama on both sides as the celebrity contestants race against time to try and win their task and avoid getting eliminated in the boardroom.

In the preview clip below, CULTURE CLUB's flamboyant singer Boy George complains about Neil drinking in the studio where they are trying to create the above-mentioned song. "I just didn't want to be around that," Boy George says. Neil, for his part, is unrepentant, saying: "I'm way over 21."

Vince Neil rocks The New Celebrity Apprentice.
He takes on the boardroom January 2 at 8/7c on NBC!

Posted by The New Celebrity Apprentice on Wednesday, December 28, 2016