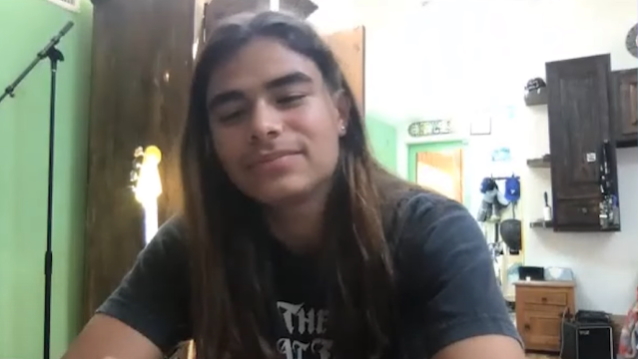 Tye discussed his involvement with "Stranger Things" in a new interview with Little Punk People. He said: "The show, from what I know, is an iconic show. It's been around for a few years and it's probably the biggest show right now. So it feels good to have some guitar on that show and also have 'Master Of Puppets' on that show as well."

Regarding how he went about recording his parts, Tye said: "We just tracked it at the studio with my dad's buddy and my buddy Steve Ogan; he has a nice studio. So we just went over there [and] we just tracked it out, hammered it out. And it ended up sounding really good, turning out really well. It actually had a better turnout than I expected. So I'm really glad that everything ended up really good with that."

Tye spoke in more detail about how he landed the "Stranger Things" gig in an interview that was posted on METALLICA's official web site. According to Tye, he was approached this past spring while he was preparing to leave the So-Cal West Side for some SUICIDAL TENDENCIES dates.

"One of the producers [Rand Geiger] is married to my third-grade teacher, Sona, at Muse School, and third grade was when I started really getting into music," he said. "They were looking for someone to do a raw guitar track for that particular part, so Sona reached out to my current teacher, J, and asked if I'd be interested in doing that based on her knowing how interested, I was in music. They didn't know whether I played guitar or not — they knew I played bass — but I told them I play both and that I was definitely interested in it. They sent me the script parts to learn, and I just went and practiced hard in my room."

Although Tye plays a fair amount of rhythm guitar when writing his own material for OTTTO and FEED THE BEAST, he was happy to get some extra tutorial help on the solo from METALLICA's Kirk Hammett, who played on the song's original recording.

"My Dad asked Kirk to help me, and Kirk sent me recordings of him playing the solo (and rhythm) down," explained Tye. "At first, I didn't know how I was going to learn it, but I quickly figured I'd be able to get to grips with it, and the clips were hugely helpful in that process."