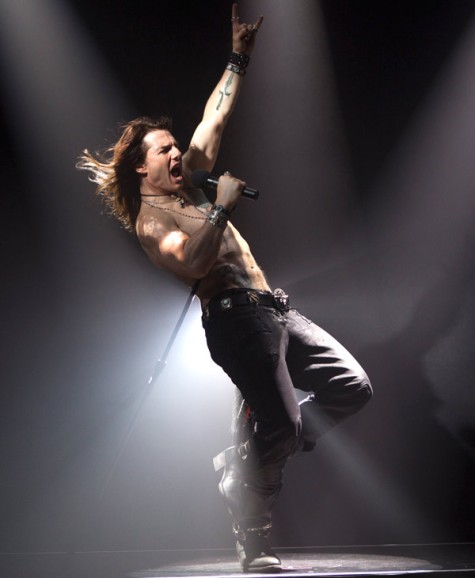 A new trailer for the film adaptation of the hit Broadway musical "Rock Of Ages", which showcases popular rock songs from the '70s and '80s, can be seen below. Tom Cruise stars in the film as Stacee Jaxx, an aging musician whose glory days are long past. Among the tunes Cruise performs are DEF LEPPARD's "Pour Some Sugar On Me", SCORPIONS' "Rock You Like A Hurricane", BON JOVI's "Wanted Dead Or Alive" and STYX's "Renegade".

DEF LEPPARD guitarist Phil Collen recently told VH1 Classic Rock Nights that he and his bandmates got to meet Cruise and that the actor "was a super-lovely guy." Collen added, "I was so impressed because he hadn't sung before and he had vocal lessons. He was literally doing five hours a day, five days a week, like truly real, getting in there and doing it. And we saw him and he was amazing, it was like Iggy Pop meets someone else and he's in great shape and it was like, 'What!?!' It was surreal, but he really pulls it off and it was like he's a total rock star."

It was previously reported that Cruise was preparing for his role by training with Axl Rose's vocal coach. "He's been studying with — seriously — Axl Rose's voice teacher like five hours a day," director Adam Shankman told The Wrap in April. "The prognosis is more than excellent."

The movie is a love story told through the music of PAT BENATAR, BON JOVI, JOURNEY, POISON, TWISTED SISTER and other artists from the 1980s.

"Rock Of Ages" also stars Alec Baldwin, Russell Brand, Catherine Zeta-Jones, Paul Giamatti, Malin Akerman and many others. It scheduled to arrive in theaters on June 14.