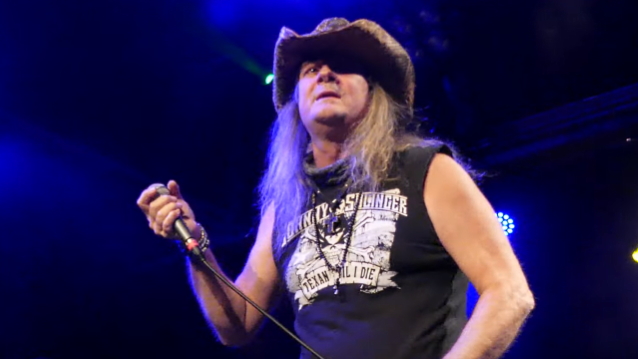 Michael Sweet (STRYPER),Todd Kerns (SLASH FEATURING MYLES KENNEDY AND THE CONSPIRATORS),Rachel Bolan (SKID ROW) and Scotti Hill (SKID ROW) are among the rockers who have reacted to the passing of Johnny Solinger, SKID ROW's longest-tenured singer. The Arkansas-born rocker died on Saturday (June 26) at the age of 55.

Solinger joined SKID ROW when it reformed in 1999, following a three-year hiatus, replacing the group's previous singer, Sebastian Bach. He was a member of SKID ROW from 1999 to 2015, and appeared on the "Thickskin" and "Revolutions Per Minute" albums, as well as the "United World Rebellion" and "Rise Of The Damnation Army" EPs.

More than a month ago, Solinger announced that he was suffering from liver failure. In a social media post at the time, he asked fans for their support, explaining "as with most musicians I do not have health insurance."

SKID ROW shared the news of Solinger's passing, writing: "We are saddened to hear the news of our brother Johnny Solinger. Our thoughts are with his family, friends and fans. Godspeed Singo. Say hello to Scrappy for us."

In a separate post on his Instagram, Bolan said: "RIP Singo. Get yourself a piece of pie with Scrappy."

Kerns posted several photographs of him with Solinger, and he included the following message: "Deeply saddened to learn of the passing of my brother in music Johnny Solinger," he wrote. "He was a big, bold flash of life. He will be dearly missed. Keep the mic warm for me when I get up there so we can rock together once more."

Michael Sweet of openly Christian rockers STRYPER sent prayers to Solinger's family, friends and fans, writing: "God Bless you Johnny and May God hold you in His hands for all eternity."

Solinger reportedly married actress Paula Marcenaro in 2011. She broke the news of his passing on Saturday, writing: "Johnny has passed. I was holding his hand. He went in peace."

Johnny has passed. I was holding his hand. He went in peace. Thank you all.
I will take a break from everything but please know I am forever grateful for your love.

I have made the decision to transition to comfort care. It is time to let him go in peace.
I thank you all immensely...

Update. Not the best news… whatever needs to happen, is gonna happen soon. Unfortunately there is some fluid in his lung...

A good man with a good soul taken way too soon. Thank you Johnny for everything you gave us. God bless you and your family. pic.twitter.com/muKqOHgi8v

I sit here with a heavy heart as I heard the news of my Skid Row brother John "Johnny Singo" Solinger. A great human, A...

So sorry to hear about the passing of Johnny Solinger. Many prayers and thoughts to Johnnys family, friends and fans worldwide🙏 God Bless you Johnny and May God hold you in His hands for all eternity🙏🙏

RIP Johnny Solinger. We miss you brother. Proud to have rocked with you. Here are a few memories.

Deeply saddened to learn of the passing of my brother in music Johnny Solinger
He was a big, bold flash of life. He will...

So sad to hear of the passing of former Skid Row vocalist Johnny Solinger. A sweet guy, a bundle of laughs, and some killer vocal pipes. Rest peacefully Johnny! 🙏🏻😥💙

Rest In Peace to our beloved Johnny 🙏. I will cherish the hour conversation we had last month, talking about rescuing...

We send this out to you …. Rest peacefully..

Rest In Peace Johnny Solinger…. It was awesome to share the stage with you and I always loved you posts showing off your fishing adventures….. gonna miss you buddy  💕

Johnny Solinger is dead.
I just woke up and got the message.
The former lead singer of my favourite band SKID ROW died...