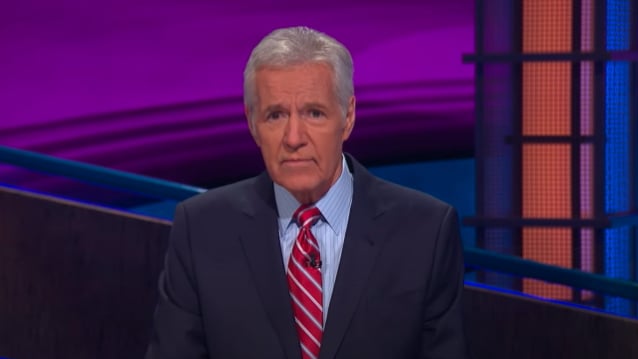 Paul Stanley (KISS),Gene Simmons (KISS),Peter Frampton, Joe Bonamassa and Tom Morello (RAGE AGAINST THE MACHINE) are among the rockers who have reacted on social media to the passing of "Jeopardy!" host Alex Trebek. He was 80 years old.

"Jeopardy! is saddened to share that Alex Trebek passed away peacefully at home early this morning, surrounded by family and friends," said a statement shared on the show's Twitter account Sunday. "Thank you, Alex."

Although the cause of death was not immediately announced, Trebek had been battling stage 4 pancreatic cancer since March 2019.

When Trebek first announced his cancer diagnosis, he posted a video to YouTube in which he said he would try to finish out that season of "Jeopardy!" A few days later, he addressed "Jeopardy!" fans again, telling them he was overwhelmed by the support he had received.

"Hi everyone, I just want to take a few moments to say thanks to the — believe it or not — hundreds of thousands of people who have sent in tweets, texts, emails, cards, and letters wishing me well following my recent health announcement," Trebek said.

"Now obviously, I won't be able to respond to all of you individually but I did want you to know that I do read everything I receive and I am thankful for the kind words, the prayers, and the advice you have offered, and I'm extremely touched by the warmth you have expressed in your comments to me."

RIP Alex Trebek. Thank you for making knowledge approachable, accessible and fun for so many. I can’t imagine you gone. https://t.co/CmeigW1wsi

Alex Trebek, Rest In Peace. A wonderful, kind soul. You will be missed 😞. https://t.co/t91YaoxW6a

Rest In Peace, Alex Trebeck. A brilliant educator and fixture of our lives for decades he made everyone who watched Jeopardy happier and smarter. Thank you. pic.twitter.com/03rVVQ70Kk

Sad to hear of Alex Trebek passing. I watched Jeopardy (an institution in our house) nearly every night & learned such a lot. I did, however, know the answer when the answer was me. 7 pm will never be the same #RIPAlexTrebekhttps://t.co/Ce2W4XunJS

Thrilling moment to be mentioned on Jeopardy. Alex Trebek was always a class act. Rest in peace sir. @jeopardy Thanks @charbenante for posting https://t.co/Fa2gDlFeua

I had the pleasure of seeing Alex Trebek host @Jeopardy in person a couple years ago, what a brilliant class act he was... #RIPAlexTrebek 😢 pic.twitter.com/JKidtcs2Hc

What an absolute legend. https://t.co/iqZP1YioKH

Rest In Peace Alex. Thank you for a lifetime of setting an example on how to conduct ourselves with class and grace. A very sad day. https://t.co/0yMqKnvaU3

Rest in peace Alex Trebek. I had the honour of meeting him once. He made me feel like we’d known each other forever. So very sad. We will all miss him. Thinking of his family today. ❤️

Although I didn’t know him, he was such a big part of my life...thanks to Jeopardy. He seemed so kind and genuine & always pleasant..even when I’ll. #youwillbemissed#ripalextrebeckpic.twitter.com/yJXlZbGtlM