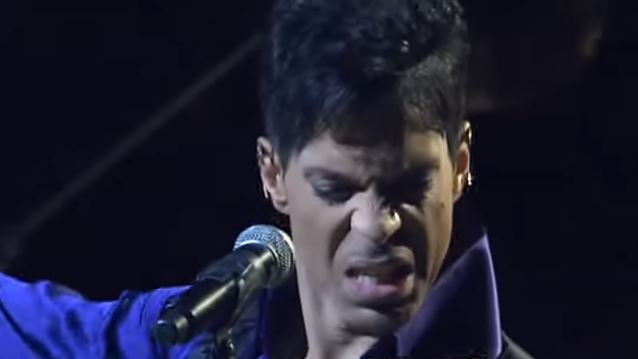 Members of GUNS N' ROSES, AEROSMITH, KISS, SLIPKNOT, MÖTLEY CRÜE, HALESTORM and JANE'S ADDICTION are among the rock musicians and scores of other artists who reacted on social media to the passing of the artist known as Prince, who died earlier today (Thursday, April 21) at the age of 57.

"It is with profound sadness that I am confirming that the legendary, iconic performer, Prince Rogers Nelson, has died at his Paisley Park residence this morning at the age of 57," said Prince's publicist, Yvette Noel-Schure.

Prince's death comes only days after he said he wasn't feeling well, causing the cancelation at least one concert in Atlanta. He eventually played the city, after which his plane made an emergency landing. At the time, his publicist said that he was"fine and at home."

Prince has won seven Grammy Awards, and he won an Oscar for the original song score to the classic film "Purple Rain". In 2007, he won a Golden Globe Award for Best Original Song, for "The Song Of The Heart" from "Happy Feet".

And today started out so well...#god#Fucking#DAMNIT

RIP PRINCE..ONE OF THE SADDEST DAY’S TO SAY THE LEAST. HE WAS THE TRUE DEFINITION OF A REAL ARTIST. pic.twitter.com/wt3wA6NHe0

One of the greatest, most gifted and unique musicians, performers and producers ever. #RIPPrincepic.twitter.com/IhEFyq42Lr

What do we do now? PRINCE. No. I hope you weren't in much pain...your music saved me time and again.

Seems like I’m in a dream. Prince dead at 57. There are no words to describe this loss.

As a kid I listened to nothing but punk rock until I went into my sisters room and saw the love sexy album cover, he changed me. I love him

I don't care if you're religious or not... All I know is that there is gonna be a party in heaven tonight... And it's gonna rain purple. ?

Prince has died, this is what it sounds like when the doves cry! #prince#ripprince#dovescry#rippic.twitter.com/w8zG9byqTJ

You influenced us on levels only the Heavens will understand. Rest In Peace. You were one of my… https://t.co/Et3ESqJUHu

Damn, another star added to the sky. #prince

PRINCE, sad to say, has passed on!!! He was a Giant. My deep condolences go out to his family, friends and fans.

THIS is a profound, profound loss... RIP PRINCE pic.twitter.com/0nssheroWn

RIP @Prince-Your talent is immeasurable & you will be sorely missed. May God Bless your soul. Prayers & thoughts to family, friends & fans.

I'm in shock and deeply saddened- just found out Prince died. RIP to one of the MOST talented and unique artists of our generation...

We lost a music legend ? #RIPPrince#Godspeedhttps://t.co/3tzGKsrHuF

#Rip to the incredibly gifted musician Prince , I will cherish the memories watching you perform… https://t.co/7JrNvqCtFt

Prince, one of the true genius artists of our day is dead and I am devastated!

Prince. What a bummer. It seems fake.

What is going on this year??? Shocked and Saddened to hear about the death of what I believe was another musical... https://t.co/qTwDBVrnKT

What a sad day. RIP PRINCE.

I'm growing very tired of writing mini eulogies for some of my favorite artists. RIP @prince - an absolute genius gone much too soon.

So sad to hear of Princes passing. A true artist and incredibly underrated and overlooked guitar player

I truly.hope that the rumors of PRINCE dying are false. It seems to be on every reliable news outlet.. This would... https://t.co/TtTo8maTIA

I'm so very shocked to hear of the sad death of Prince which is being reported today. Such a musical genius... https://t.co/gGLkt61qee

What a terrible year for losses. RIP Prince. https://t.co/1TAuHGnSKN

RIP Prince and thank you for your music! https://t.co/7jXAe6yZSR

Prince is a total badass. Sad that he is gone. Life is short. Enjoy the ride. https://t.co/wEDXBOgH8O

Wow another great one has moved on! Thank you for unique and wonderful inspiration. #prince#rip… https://t.co/az3DiVCOps

So sad to hear about Prince passing away. No words.

This is what it sounds like when doves cry. #princehttps://t.co/S6Sb8uQm68

#rip to Prince the shredder, singer, songwriter, performer and icon. Thanks for everything you… https://t.co/zFz65xCKbR

Very sad to hear about Prince passing away. He was true artist and innovator. Another big loss for Rock & Roll...

Prince — A giant talent that gave me many hours of musical pleasure. My favorites are Around the World in a Day, Parade and many more.

My deepest condolences go out to family/friends of #Prince#RIPPrince. He was such a great and fiercely independent… https://t.co/GyskChLUko

As an icon passes today, let it be a reminder to TRULY live life. Our time is short. #ShitYesPrince#RIPPrince@prince

Every1 is so saddened when Prince or other Icons die. Real life is not this life. This life is a blink of an eye,... https://t.co/9mOFksC8VU

Just another heartbroken person over the loss of Prince. I can't believe it. He was a genius and an inspiration and a BADASS...and so young.

Rest in Peace Prince. True integrity from this gentleman. Met him in '93 while recording LoungeFly @ Paisley Park... pic.twitter.com/De6Wt3vOGl