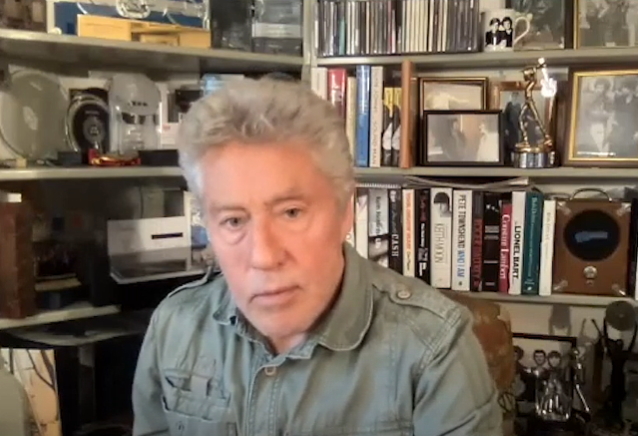 THE WHO's Roger Daltrey joined The Coda Collection for a new career-spanning conversation. The icon discussed feeling belittled as a singer, why he's "the number one hater of the Internet," drug use in the band and a heated encounter with Keith Moon after flushing amphetamines down the toilet, the band's performance in New York City following 9/11, why Mick Jagger is the number one rock and roll performer, Jimi Hendrix "stealing" Pete Townshend's stage act, his current relationship with Townshend and the possibility of THE WHO releasing new music and much more.

Asked if he sees more music coming from THE WHO in the future, Roger said: "There's no point in making any music if you can't earn a living out of it — for me, anyway. What's the point? On the last record, it cost me money to make it. I don't see the point in doing much of that, you know? I'm too working class for that. I've been working since my 15th birthday, and to go out and not get paid for a job… I don't mind if it's a charity, but I have a family to feed as well — a lot of grandchildren and a lot of children. So it's tricky. I don't know whether we will ever make any more new music, but I never say never — let's put it that way.

"I speak to Pete once a year," the 77-year-old singer continued. "I haven't seen him for two years. I miss him, seeing him. Always enjoy seeing him. But we're not that kind of friend. We don't need to be. We know we're there for each other. I've always been a bit of a loner anyway."

In October 2020, THE WHO released a new version of the 2019 album "Who" featuring an updated version of "Beads On One String" newly remixed by Pete Townshend and acoustic tracks from the band's only live shows of 2020.

The songs on the deluxe version of "Who" were recorded in Kingston on Valentine's Day this year exactly 50 years to the day since THE WHO's seminal show at Leeds which became the infamous live album "Live At Leeds".

"Who" was THE WHO's first set of new material since 2006's "Endless Wire", which debuted at No. 9 in November of that year.

This past April, Townshend was asked by Rolling Stone about reports that he was working on material for THE WHO's next album. He responded: "I'm not working on the next WHO record. I think what happened is that when I did an interview for Uncut about 'The Who Sell Out', I was asked whether or not I was preparing any material or writing anything. I said, at the time, which is where I was since I did this interview before Christmas, that I had an idea for a series of songs. I'd written a series of essays and I was working on it. And subsequently, I had a conversation with Roger [Daltrey, vocals] and flew the idea past him, and he half-liked it, and said it would be interesting to hear when the music comes. And then I started to read things that he was saying in the press, which were very much at odds with the conversation that we had face-to-face. I think we really need to have another proper conversation. Until we have that conversation, I don't think there's any real prospect of a Who album developing because it's all in my hands and I tend to do it, and then Roger comes along and sings the songs.

"I need to know that I'm … what's the word? I don't want to use the word 'servicing.' But I need to know that I'm facilitating Roger's needs as a singer," the 76-year-old continued. "There's only two of us now. And these days, he insists on having music to sing, which he believes in, completely and utterly, that he can get inside. Unless he can inhabit the story of the song, he can't do a good job. And so it means that I have to, in a sense, work as as tailor. I'm not really that free to write whatever comes off the end of my tape machine.

"And so that's where I am at the moment. I do a have a number of ideas. For the last year, I've been working on a variety of things. I did some work with some other artists. I've been working on my own piece for 'The Age Of Anxiety' based on the novel. I don't know whether there will be another WHO album. It needs Roger to be on it. And I think he was even complaining that he didn't make any money out of it. I was, like, 'Who does make money out of fuckin' records anymore?' I don't know who does. Maybe two or three people, but not many."