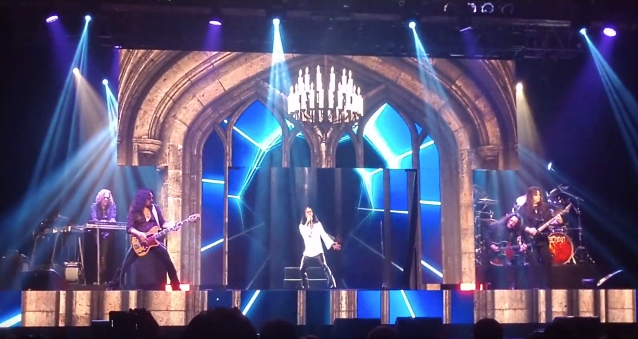 THE RODS frontman David "Rock" Feinstein joined the Ronnie James Dio hologram on stage on June 9 at The Paramount in Huntington, New York to perform the BLACK SABBATH classic "Neon Knights". The show was part of the month-long "Dio Returns" U.S. tour, which kicked off on May 31 in Fort Myers, Florida.

Feinstein is Ronnie's cousin and former member of their joint band, ELF.

The Dio hologram production uses audio of Ronnie's live performances from throughout his career, with the DIO DISCIPLES band playing live, consisting of Simon Wright on drums, Craig Goldy on guitar, and Scott Warren on keyboards, along with Bjorn Englen on bass. Also appearing with them are Owens and Logan.

The 90-minute concert includes all of the DIO fan favorites — such as "Holy Diver", "King Of Rock And Roll" and "We Rock" — plus select tracks from RAINBOW and BLACK SABBATH.