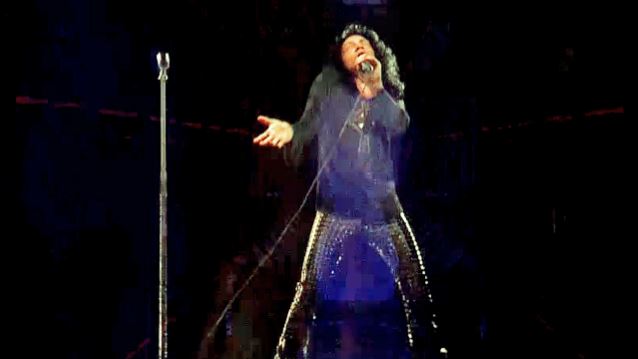 A hologram of the late Ronnie James Dio will make its U.S. debut at the 28th annual Pollstar Awards on February 2 at the The Novo (formerly Club Nokia) in Los Angeles, California. Created by Eyellusion, the appearance of the heavy metal icon will take place during a performance by DIO DISCIPLES, which pays tribute to Ronnie and is fully supported by his widow/manager, Wendy.

Pollstar Awards honors the best of the worldwide concert industry as the concluding event of Pollstar Live!, which will be held January 31 to February 2 at the J.W. Marriott hotel.

Wendy and Eyellusion's Jeff Pezzuti will discuss the Dio hologram earlier that day at a Pollstar Live! panel, "The Hologram Experience", where they will be joined by APA's Troy Blakely and TKO's Andrew Goodfriend, among others.

Pezzuti recently revealed plans for a 2017 tour featuring the hologram, which will showcase various eras of the legendary metal singer's career.

"For the tour, he's going to have different looks," Pezzuti told the "Talking Metal" podcast. At Wacken, the hologram was built around Dio's image from "somewhere around '88, the 'Dream Evil' era. For this next tour, we're going to be somewhere later than that for certain songs and maybe earlier than that for other songs."

The concerts will include several classic tracks from Ronnie, Pezzuti revealed. "Ronnie will be involved in each show from probably six to seven songs a night that he will be singing on," Jeff said. "Some of the ones we can expect are 'We Rock', 'Holy Diver' and 'Rainbow In The Dark'."

Wendy, who manages DIO DISCIPLES and is affiliated with the Eyellusion team, said last year that she was blown away by the initial public appearance of the Ronnie James Dio hologram. "When I first experienced the full production of Ronnie performing with his band as a hologram, I couldn't believe my eyes and ears," she said. "We have been able to get Ronnie back up on stage where he belongs, ensuring that his music and memory live on."

Goldy defended DIO DISCIPLES' decision to perform with the Dio hologram, saying: "We know how much the fans miss Ronnie and the special and unequaled element that he brought to his live performances. Being able to recreate that same kind of magic for his fans at Wacken was incredible. For so many years, Ronnie always invested big in his live shows as his way to give back to the fans, and that is exactly what we aimed to do with this latest performance. We can't wait to bring this experience to even more of his fans and perhaps even a newer generation when we bring this incredible live experience on the road."