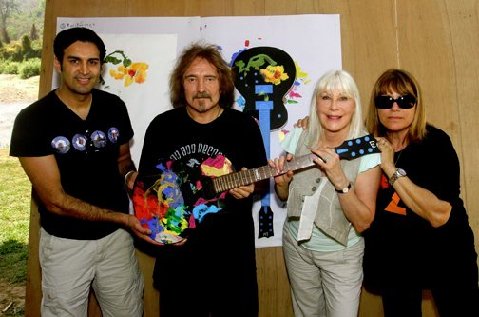 The Ronnie James Dio Stand Up And Shout Cancer Fund has teamed with the Asian Elephant Art & Conservation Project (AEACP) to create one-of-a-kind guitars painted by the project's elephants in Thailand to raise money and awareness for both organizations. Wendy Dio, president and founder of Stand Up And Shout, board chair Gloria Butler and medical director Dr. Sandeep Kapoor, along with legendary BLACK SABBATH/HEAVEN & HELL bassist Geezer Butler and world-renowned photographer Mark Weiss, are currently in Chiang Mai, Thailand, home to the AEACP, where the guitars are being painted.

The talented elephants of the Asian Elephant Art & Conservation Project, whose paintings are now exhibited and sold in museums and galleries around the world and have been featured in National Geographic, are painting guitars graciously donated by the ESP guitar company. These painted guitars will be auctioned off with half of the proceeds going to AEACP and the other half going to SUAS.

The Ronnie James Dio Stand Up and Shout Cancer Fund is a privately funded nonprofit organization dedicated to cancer prevention, research and education. It was founded in memory of the late singer who died in 2010. The organization is collecting additional guitars donated by celebrated musicians for a larger fundraising auction later this year with 100 percent of the proceeds going to The Ronnie James Dio Stand Up And Shout Cancer Fund. Some of the artist autographed guitars already include METALLICA, Slash, AEROSMITH, DREAM THEATER, Kip Winger, Billy Sheehan, Geddy Lee, AS I LAY DYING, Brian May, CANNIBAL CORPSE, LIZZY BORDEN, SLAYER, Tom Morello, NO DOUBT, LIT, IN THIS MOMENT, GWAR, BON JOVI, REO SPEEDWAGON, Paul Gilbert, Kip Winger, MOTÖRHEAD, THE RODS, Chris Jericho, Alice Cooper and more.

The AEACP is dedicated to saving the diminishing number of Asian elephants and to raise public awareness of the plight of Asian elephants. National Thai Elephant Day annually celebrates the importance of elephants a part of Thai culture and as part of their environment. Currently, there are between 3,000 and 4,000 elephants living in Thailand, half of which are domesticated.