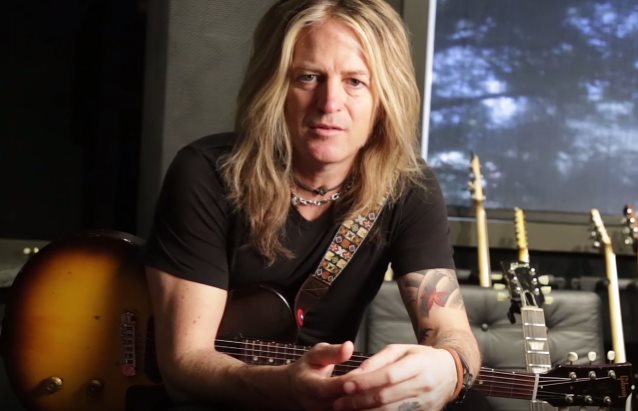 RONNIE JAMES DIO Would Be 'Pissed' About His Hologram, Says DOUG ALDRICH

Former DIO guitarist Doug Aldrich says that Ronnie James Dio would be "pissed" about the fact that a holographic version of the legendary heavy metal singer is being prepped for a world tour.

"I would like to see it myself, just to see it," Aldrich, who was in DIO between 2002 and 2006, told the "White Line Fever"podcast. "I love hearing those songs, I love Ronnie, so that would be cool. But I think Ronnie would be pissed. I think so. Ronnie would be, like, C'mon, let me be dead in peace!' Ronnie was a no-frills guy. He was not down for stuff like that."

Aldrich takes up the story. "At the Super Bowl, they had a half-time thing with Prince," he said. "A big curtain came down and there was a projection of Prince. It was, like, 300 feet tall. It was really cool, I thought.

"My neighbor is the old guitar players for Prince, Wendy. She had gotten her son a basketball hoop and was trying to assemble it by herself. I hadn't met her yet. I went over and said, 'You need a hand, I think,' and she's, like, 'Yeah, yeah. I don't know how the hell… There's all these parts.' We built this hoop for her together, and I said, 'Oh, by the way, what do you think Prince would think about that?' She goes, 'He'd hate it — hate, hate it!'

"But I thought [the Prince projection] was great, so I'd love to see the hologram thing. I just hope they get it to be bigger than life because that's how Ronnie was."

The Dio hologram was created by a company called Eyeillusion and made its debut at the Wacken Open Air festival in August 2016 in front of more than 75,000 fans.

Wendy Dio, who is a member of the Eyellusion team, recently said that the people that criticize the Ronnie James Dio hologram should at least see it in person before voicing their disapproval. "Don't criticize it if you haven't seen it," she told "Whiplash", the KLOS radio show hosted by Full Metal Jackie. "It's done with love. The band love doing it. And we just wanna keep Ronnie's memory and his music alive."