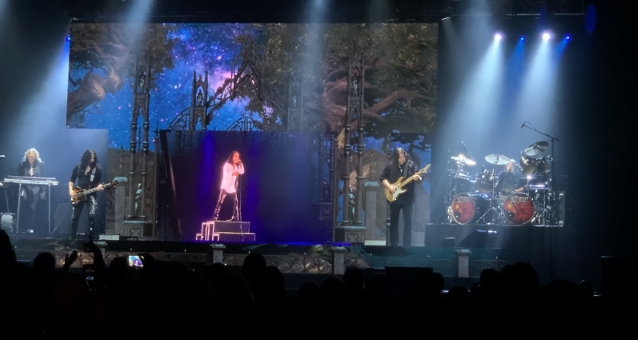 The new Ronnie James Dio hologram played on June 21 at The Bomb Factory in Dallas, Texas. The show was part of the month-long "Dio Returns" U.S. tour, which kicked off on May 31 in Fort Myers, Florida.

The 90-minute concert includes all of the DIO fan favorites — such as "Holy Diver", "King Of Rock And Roll" and "We Rock" — plus select tracks from RAINBOW and BLACK SABBATH.

Fan-filmed video footage of the Dallas show can be seen below (courtesy of YouTube user "Jody Thomas").

Eyellusion CEO Jeff Pezzuti said: "Ronnie James Dio was not only known for his amazing vocals, but also his incredible stage shows and performances. This show is a must-see for all fans of Ronnie, new and old. The new stage production we have created, plus the brand new Ronnie James Dio hologram, have to be seen to be believed. This is a first-of-its-kind metal show! We are celebrating Ronnie, with his live vocals, with his band he toured with for the last 17 years, and with a show that his fans will love! It's an over-the-top metal experience that will have the fans raising their horns throughout the show!"

Ronnie's widow and longtime manager, Wendy Dio, who is a member of the Eyellusion team, spoke to Patch.com about the new Ronnie James Dio hologram. Asked what is different about it, Wendy said: "Technology has come a long way since the first one was created. I'm much happier with the new one. It's a million times better. I wasn't happy by the end of the last tour. I wanted Ronnie to look more like Ronnie. I was very picky about the eyebrows actually. Maybe someone else wouldn't have noticed it but I noticed it. I wanted to make sure that everything was perfect. He's also now in the same line as the band, in front. Before, he was at the back of the stage."

According to Wendy, "about a year" of planning and design went into creating the new hologram. "It's like a cartoon," she said. "Every stroke, every eyelash, has to be done individually. Then there's me going, 'I don't like that!' The people involved really care about it. We're all there during the creation, making it exactly what we wanted to do."

Wendy told Patch.com that critics of the Dio hologram are "entitled to their opinion. I just ask that people come and see the show first before criticizing," she said. "We got a lot of flak in the beginning but I think more and more people are getting used to it. It's for the fans. It's for the fans who would love to see Ronnie back up on the stage and the ones that never got a chance to see him. I think Ronnie would approve. If anybody saw the 'Sacred Heart' tour in 1986 we tried to make a hologram then. We had Ronnie in a crystal ball hanging from the stage talking through it. Also he was an innovator in music, so why not be an innovator in technology."