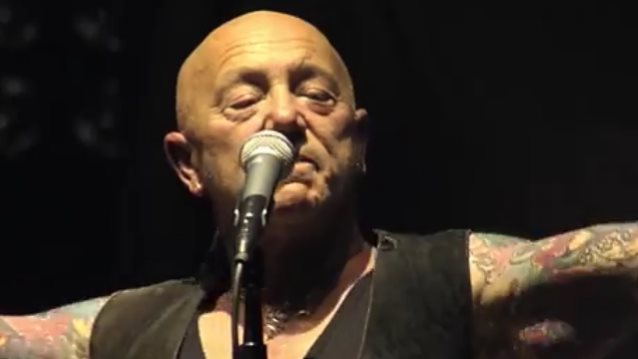 ROSE TATTOO singer Angry Anderson says that he would have considered fronting AC/DC if he had been asked to step in for Brian Johnson on the Australian band's recent tour.

AC/DC postponed the last ten dates of its recent North American trek after Johnson was advised to stop playing live or "risk total hearing loss." The band has since completed the European leg of its tour with GUNS N' ROSES singer Axl Rose as a "guest vocalist," with Johnson apparently not returning to the group.

Prior to Axl being announced as the new touring singer for AC/DC, many people felt that Angry Anderson, who has been fronting ROSE TATTOO since 1976, was a better choice to replace Johnson.

Asked by The Rockpit for his thoughts on the fact that he wasn't asked to step in for Brian, Anderson said: "I knew I wouldn't [be]. I thought it was obvious it would be Axl. The other singer I thought it may be would be Sammy Hagar."

Pressed on whether he would have "been on that plane" if he had gotten the call to sing for AC/DC, Anderson said: "Depends on what they were offering. Of course. Why wouldn't I?"

ANTHRAX guitarist Scott Ian recently told Brazil's R7 that he thought the ROSE TATTOO singer would have been the best man for the AC/DC job. "I wish they would get Angry Anderson," he said. "I don't know if Angry Anderson is still even singing anymore. But I always thought, in 1980, he was the guy. I didn't know who Brian Johnson was yet, but I knew Angry Anderson in 1980, and when Bon died, I was hoping Angry Anderson was gonna join AC/DC, 'cause he was from Australia and he sounded like a guy who should be in AC/DC. But then Brian came and Brian was great. So who knows?"

Johnson had been AC/DC's frontman for 36 years, ever since replacing the late Bon Scott in 1980 and making his debut on the classic "Back In Black" album.

Rose will next join AC/DC for the ten North American shows that need to be made up starting in late August.