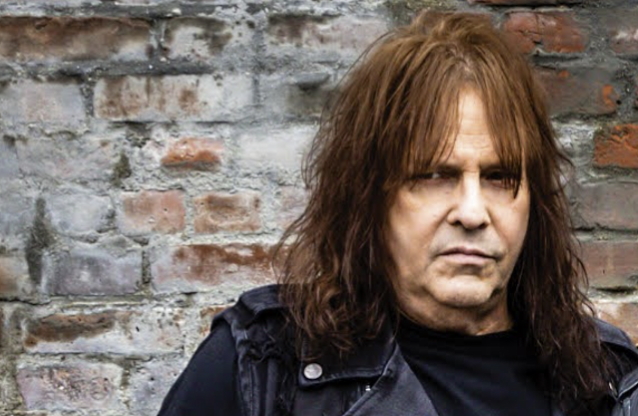 Former MANOWAR guitarist Ross "The Boss" Friedman says that his dismissal from the band more than three decades ago was "the worst possible mistake ever made".

Friedman reflected on his involvement with MANOWAR during a recent interview with the "Mike Nelson Show". Speaking about the last two LPs he made with the band, Ross said (as transcribed by BLABBERMOUTH.NET): "'Fighting The World' [1987] and 'Kings Of Metal' were two of the first digital records made. We recorded on something that's called the Synclavier. It was just a basic Pro Tools kind of thing. 'Fighting The World' sound was good, but 'Kings Of Metal' had a much better sound. And I think that 'Kings Of Metal' just came at a time that the band was peaking, especially in Europe. 'Cause I had done all the heavy lifting with the band. And then when it came out, boom — and then I was out of the band. How do you do that? For Joey [DeMaio, MANOWAR bassist and leader], it probably could be the worst… He fired me, by the way. And [it was] the worst possible mistake ever made, beside Mick Taylor leaving THE ROLLING STONES. Because the tour that could have resulted after 'Kings Of Metal' and the live record and the whole process was cut short. They had David Shankle — he's okay, but the whole energy of the band was gone. And it took six years to do the next record, 'The Triumph Of Steel'. I had done six records in six years with MANOWAR. And it took six years to do another record."

Asked why he was fired from MANOWAR, Ross said: "Well, when money and greed and all the same bullshit rears its ugly head in a business, things happen. I don't bullshit from nobody, and I wasn't gonna take bullshit from [Joey] — telling me what to wear, what to… First of all, wait a minute. When you met me, I had already done four major albums, major records on major labels. I had already done three with THE DICTATORS and one with SHAKIN' STREET. You had done zero. So all these people that we're talking to now I had met a long time ago in Europe. These guys like Malcolm Dome and Dante Bonutto and all these guys in Kerrang! [magazine], I'd been interviewed by them many times over before MANOWAR. I said, 'You can't tell me how to talk and what to say and what to dress.' But he knew that. All he wanted in his band was puppets… Money and greed, and him not having to have a partner like me, 50 percent partner [is the reason I was fired]. I don't like airing that out. But we see how great it was after I left. [Laughs]"

Last year, Friedman was asked by Waste Some Time With Jason Green if he would consider playing with MANOWAR again, to which he said: "Well, if the financial arrangements were right. But [Joey is] the kind of scumbag that would never have that… I'll never say no, but you never know. I just called him a scumbag, so… It's not gonna happen. He's secure in the fact that MANOWAR are mediocre fucking pieces of shit right now. What they're putting out to the public [is] just terrible."

After BLABBERMOUTH.NET published Ross's comments from the Waste Some Time With Jason Green interview, he sent a short statement conveying a more conciliatory tone.

"I would like to apologize to MANOWAR, the fans and Joey for the insult," he wrote. "If anyone knows me, you know that's not my style for saying things like that. I violated my own rule. Again, I am truly sorry."

Ross clarified to the "Mike Nelson Show" that he only "apologized to the fans" for his comments. "What I said about him, I just said I went against what I believe in, is to not air that shit out in public. And I apologized to the MANOWAR fans for saying that. I didn't apologize to him."

During the aforementioned Waste Some Time With Jason Green interview, Friedman stated about the circumstances surrounding his exit from MANOWAR more than three decades ago: "When a band gets big and the money hits, greed, avarice and evil takes place. A guy that I thought was my partner wasn't," he said, referring to DeMaio. "So he wanted me [out]. He goes, 'You've gotta go.' I go, 'Really? I've gotta go why? I've gotta go why? We're equal partners, 50 percent. Why do I have to go? Why don't you go?' The whole thing is he was so — his antics and his bullshit was so insane that I had it up to [my neck] with him. When you have it up to [your neck] with someone, you've just gotta go, 'Get the fuck outta here. I can't take this anymore.'

Earlier this year, Friedman told Sofa King Cool about the 40th anniversary of "Battle Hymns": "It is obviously an iconic record that has pretty much started power metal. We pretty much put power metal on the map with that record. 'Cause there really wasn't power metal before that. I mean, [Ronnie James] Dio did some things amazingly, and Ritchie Blackmore's RAINBOW, of course, but I think 'Battle Hymns' was the first real, true power metal record. That was my baby."

Asked if there were any plans to reissue "Battle Hymns" for its 40th anniversary, Ross said: "That record has been reissued so many times. I was asked to leave MANOWAR in 1988, right after the release of 'Kings Of Metal'. And [DeMaio] has repackaged everything up so many times… He re-recorded 'Battle Hymns'; he re-recorded 'Kings Of Metal'. Both suck. 'Cause you can't re-record a record; you can't redo it. It's like TWISTED SISTER redoing 'Stay Hungry'; you just can't do it. Especially, he did it without me. I mean, I could see if he had the original lineup playing 'Battle Hymns' and the original lineup playing 'Kings Of Metal', with just [drummer] Donnie [Hamzik] instead of Scott [Columbus]; Scott's not with us no more. But without me? And you tune down those songs. They were written in standard pitch. And then MANOWAR's tuning 'em down for [singer] Eric [Adams]. Those songs lose all their energy. No. Nah nah nah nah nah nah. You've gotta leave genius alone, leave greatness alone. They're untouchable."

Pressed about the chances of him reuniting with MANOWAR for a tour celebrating the 40th anniversary of "Battle Hymns", Ross said: "You wouldn't say that I don't have a good relationship with my old partner, but it's just not there. I'm not saying things can't magically patch up. But [Joey] doesn't want any part of me telling him what he should be doing. And it's okay. I'm happy with my band, I'm happy with DEATH DEALER, I'm happy with THE DICTATORS. Hopefully I'm gonna be very, very busy. I don't have to be in a band with a tyrant."