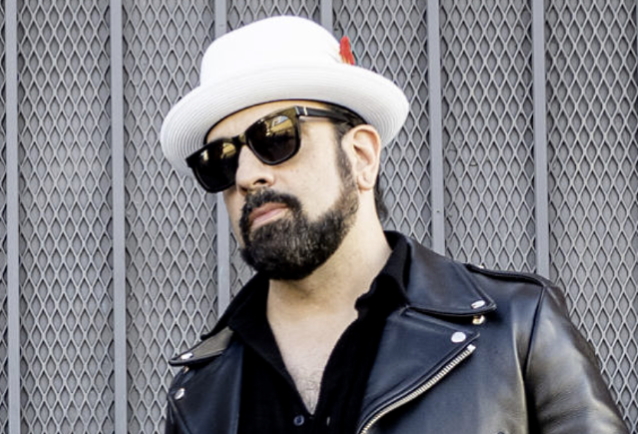 VOLBEAT's ROB CAGGIANO On Why He Left ANTHRAX: 'I Felt Like My Role In The Band Ran Its Course'

In a new interview with Metalshop TV, Rob Caggiano spoke about how he went from his previous gig with ANTHRAX to producing the VOLBEAT album "Outlaw Gentlemen & Shady Ladies" to joining the Danish band as their guitarist. He said (as transcribed by BLABBERMOUTH.NET): "I decided to leave ANTHRAX back then because I kind of felt like… At that point I had been in the band for a long time, and I kind of felt like my role in the band ran its course, so to speak. And I just kind of felt like I was hitting my head up against a glass ceiling a long time. And it just felt like I needed a change. I wasn't feeling inspired. Don't get me wrong — I love those guys and I loved every minute of my time with them. It was such an amazing, wild ride. But I just felt like I needed to do something else at that time. And the VOLBEAT thing just happened, and it was organic, and it felt right. So, here I am."

Regarding what it was about VOLBEAT's music that appealed to him, Rob said" "I think for me, the thing with VOLBEAT, it's like a mixture of all the sounds that I like. [Laughs] It's a lot of stuff that I grew up listening to all wrapped into one package. When I first VOLBEAT, I heard the MISFITS, I heard METALLICA, I heard a little bit of the RAMONES… There's some SLAYER-vibe riffs. There's just a lot of different stuff. And it's all fun — it's a lot of fun; the music is a lot of fun. And it definitely connects with a lot of people. That's why I do it."

Caggiano previously talked about his split with ANTHRAX in a 2014 interview with Ultimate Guitar. At the time, he said: "At that point when I decided to leave those guys, I just felt like I needed a change. The thing is the band was doing amazing. ANTHRAX was on top of their game. We had just come off the 'Big Four' tour and all this awesome stuff happened. But the bottom line was I just wasn't happy and my heart wasn't in it.

"The main thing was it was never a creative outlet for me," he explained. "That's something I'd been thinking about for a while — for years. It didn't happen overnight. I know to the public and to the fans it seemed like, 'Wow, this came out of left field,' but it really didn't. I'd been talking to those guys and I had many conversations with them over the years, so they were definitely not surprised when it went down at all. Yeah, it's just something I needed to do for my own sanity.

"In ANTHRAX, my role was, 'You're playing the solo.' [Laughs] It's like, 'All right, cool.' Don't get me wrong, I love playing solos. It's what I do. I'm a lead guitar player. But there's definitely so much more I can do and I had way more to say musically than what I was doing with ANTHRAX. That's basically it."

Asked if he actually brought in song ideas that didn't get listened to, Caggiano told Ultimate Guitar: "It would never even get to that point. It's cool. That's their thing. They have a system and they have a way of working and they've been doing it like for ages. I totally respected that, but after a while it just got to the point where I felt like I was going through the motions. I'm not the kind of person that can do something unless it's 100 percent. I needed to make a change and I needed to move.

Rob went on to say that he "never understood" why the rest of ANTHRAX wouldn't even entertain his ideas. But then he clarified: "I do understand it, but at the same time, I was with those guys for a really long time. You would think at some point along that journey, we would have collaborated on something. But it's totally cool. It is totally cool. I'm very proud of all our accomplishments, and I'm so proud to be part of the ANTHRAX legacy. We braved a lot of storms, and there were a lot of dark periods and great periods throughout that whole time. So I'm really proud of it."

Caggiano replaced former VOLBEAT guitarist Thomas Bredahl, who was given his walking papers in November 2011.