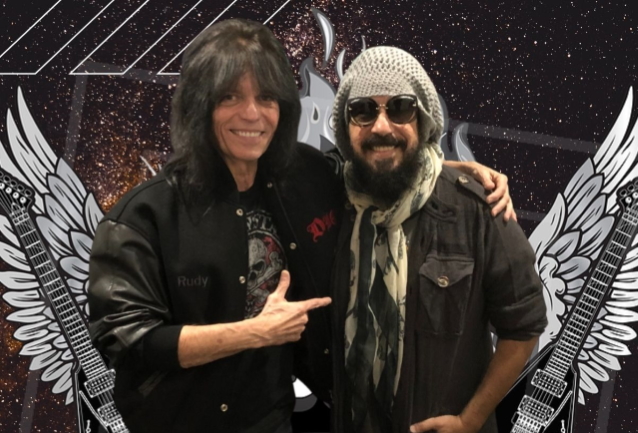 Monsters Of Rock has partnered with Spotify to bring a new listening experience that brings together music and spoken-word content in an easy and elegant package, allowing full songs and talk commentary to live together wrapped up in one show.

Monsters Of Rock kicks off is inaugural Spotify episode with the late Frankie Banali. This coincides with what would have been Frankie's 69th birthday (November 14). It was initially broadcast in December 2018 from their Hollywood studios. Host Rudy Sarzo, Banali's former bandmate in QUIET RIOT, went back into the vault to pull out this timeless gem. They reminisced about everything from recording with QUIET RIOT to touring with IRON MAIDEN to playing the U.S. festival to landing the first No. 1 heavy metal album in music history. This was an inside snapshot of two lifelong friends sitting down for a couple of hours.

"We are excited to bring this very special episode to the fans," Sarzo said. "Frankie Banali was my mentor, my QUIET RIOT brother and dear friend for 48 years. It's an honor to share with you some of Frankie's unforgettable memories in his own words on what was my first episode of 'Six Degrees Of Sarzo'."

Monsters Of Rock is live today on Dash Radio, Spotify and all associated distribution touchpoints.

Celebrating over 40 years of all things rock, it has grown from a single concert in 1980 at Castle Donington to the global phenomenon it is today. Monsters Of Rock Radio is heard by over 500,000 listeners per day on the Dash Radio Network. It also currently airs on over 60 FM stations, holding the No. 1 or No. 2 slot among males 25-54 in nearly every market.