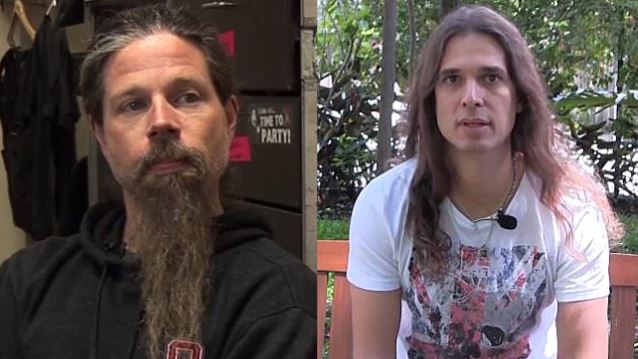 MEGADETH is rumored to have hired drummer Chris Adler (LAMB OF GOD) and Brazilian guitarist Kiko Loureiro (ANGRA) to play on the band's new album.

If true, Adler's involvement with MEGADETH would apparently be limited to studio work only, and he would not be expected to join the band on the road to promote the CD, which is scheduled to be recorded starting on March 17 in Nashville, Tennessee.

MEGADETH was still finalizing the recording lineup for its new album last week, with the band's mainman, Dave Mustaine, tweeting on March 10 that he was "excited to be auditioning one of my final picks for my new guitarist today."

Asked if there was any news regarding who will become MEGADETH's new drummer and lead guitarist, the band's bassist, David Ellefson, said in a recent interview with Full Throttle Rock: "There are some developments with it, and I think I've come to realize… We've certainly spent the last several months, [since] late November, sorting things out. I think, what I've come to is that we need to make a great record, 'cause that should always be… The songs have always determined who's going to be in the band, from day one. And nothing should change with that. To go back and chase some glory day is like chasing fool's gold. I think that the songs, and the album, are going to determine what the lineup is and I think that's the proper order of putting the horse in front of the cart."

Mustaine and his family moved to Tennessee in October after living in Fallbrook, California for a number of years.