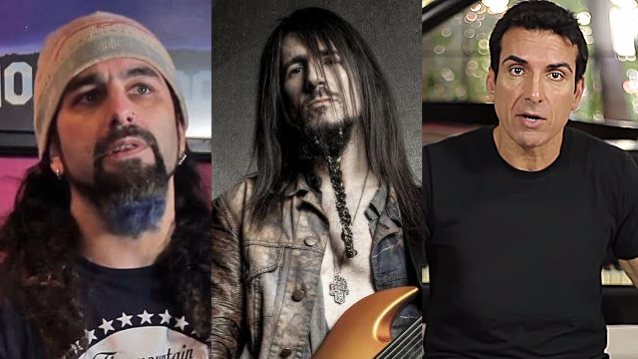 Although the former DREAM THEATER drummer has not yet confirmed Thal and Sherinian's involvement in the new project, he has been actively deleting comments on his official forum from fans who have concluded through various social-media posts that the pair are working with Portnoy in the freshly launched band.

Portnoy revealed the new project's existence in a March 1 post on his Facebook page. He shared a photo of himself in the studio and wrote in the accompanying caption: "Hmmmm....what have we here?? I'm in L.A. recording an album with something NEW... Sorry, this is all you're gonna get outta me on this for a while... More will be revealed at a later date... stay tuned! #ProgMetalSupergroup Coming soon..."

Asked in a 2014 interview how he goes about handling the changes in playing styles between his many different bands and projects, Portnoy said: "Well, I'm just a big music fan of every style, so it's very natural for me to play different styles with different bands and different musicians, and switch it from day to day, just because I'm a fan. It's very comfortable for me. I'm just such a fan of so many kinds of music that I could change hats from day to day, even from hour to hour. [Laughs]"

Portnoy, who co-founded DREAM THEATER more than thirty years ago, abruptly quit the band in September 2010 while on tour with AVENGED SEVENFOLD. He has since been replaced by Mike Mangini (ANNIHILATOR, EXTREME, JAMES LABRIE, STEVE VAI).

Portnoy revealed a few years ago that he tried to rejoin DREAM THEATER, only to be rebuffed. He explained the move in a 2015 interview by saying: "I was doing whatever it would take to keep peace and keep things going smooth. And at that point, they were just only speaking through their lawyer. But it's a 25-year relationship coming to an end, so, obviously, it goes very, very deep, not only personally and emotionally, but also legally, and all the red tape that's involved with something like that. So it was a tough time, a tough period, and, luckily, we all got through it. But, yeah, I don't wish that kind of stuff on anybody in a band. It's tough."