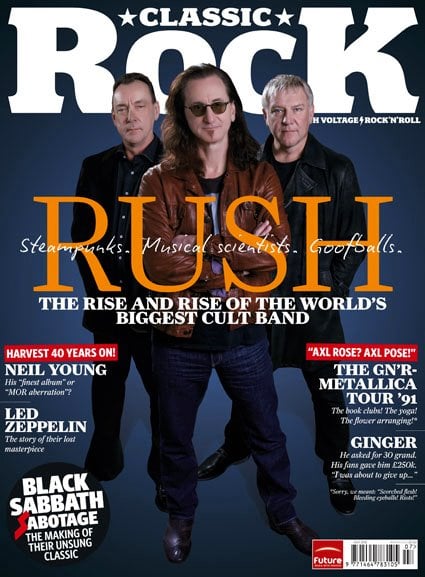 U.K.'s Classic Rock magazine has uploaded a new video interview with vocalist/bassist Geddy Lee of Canadian rock legends RUSH in which he talks about the making of the band's new album, "Clockwork Angels". Check it out below.

The July 2012 issue of U.K.'s Classic Rock magazine features RUSH on the cover and includes a seven-page article on the band about the recording of the band's new CD.

RUSH's first new collection of original material in over five years and their first studio release via Anthem/Roadrunner Records, "Clockwork Angels", will be released on June 12.

Lyrically, "Clockwork Angels" chronicles a young man's quest across a lavish and colorful world of steampunk and alchemy as he attempts to follow his dreams. The story features lost cities, pirates, anarchists, an exotic carnival, and a rigid Watchmaker who imposes precision on every aspect of daily life. The novelization of "Clockwork Angels" is being written by science fiction writer Kevin J. Anderson in collaboration with RUSH drummer and lyricist Neil Peart.