RUSH: 'Wandering The Face Of The Earth: The Official Touring History' Book Due In October

Insight Editions has set an October 15 is release date for "Rush: Wandering The Face Of The Earth: The Official Touring History". The book includes a foreword from PRIMUS's Les Claypool, and an afterword by THE POLICE's Stewart Copeland. The 304-page hardcover was compiled by Skip Daly, a RUSH expert for over 30 years, and Eric Hansen, who started the popular "Power Windows" RUSH fansite at 2112.net.

Hansen stated about "Rush: Wandering The Face Of The Earth: The Official Touring History": "We first conceived it nine years ago, not long after the release of [the RUSH documentary] 'Beyond The Lighted Stage'. Covering the 40-plus-year touring history of our beloved band, it is a book that not only compiles the tour dates and setlists, but also tells the stories of what happened on tour. We weren't alone in our quest, though, and enlisted the help of many fellow fans (you know who you are) to help flesh out these stories. With early approval from the folks at [RUSH's management company] SRO, we were not only provided with their tour records, but they helped us connect with many crew members both past and present. In addition, we had the pleasure to speak to past band members such as Mitch Bossi, Lindy Young and Gerry Fielding, as well as John Rutsey's brothers, Mike and Bill. When it came to the cover, we pitched some ideas over the phone to Hugh Syme, and he came back to us with the amazing cover you see [below]."

"Fondly known as the Holy Triumvirate, RUSH is one of the top bands to shine through rock-and-roll history. 'Wandering The Face Of The Earth' covers RUSH's storied touring career, from their humble beginnings as a Toronto-area bar band playing middle school gymnasiums to their rise as one of the world’s most sought-after live acts, selling out massive arenas around the globe. This book includes every setlist, every opening act, and every noteworthy moment meticulously researched and vetted by the band themselves. Along with spectacular, never-before-seen imagery, this is THE must-have tour compendium for RUSH fans." 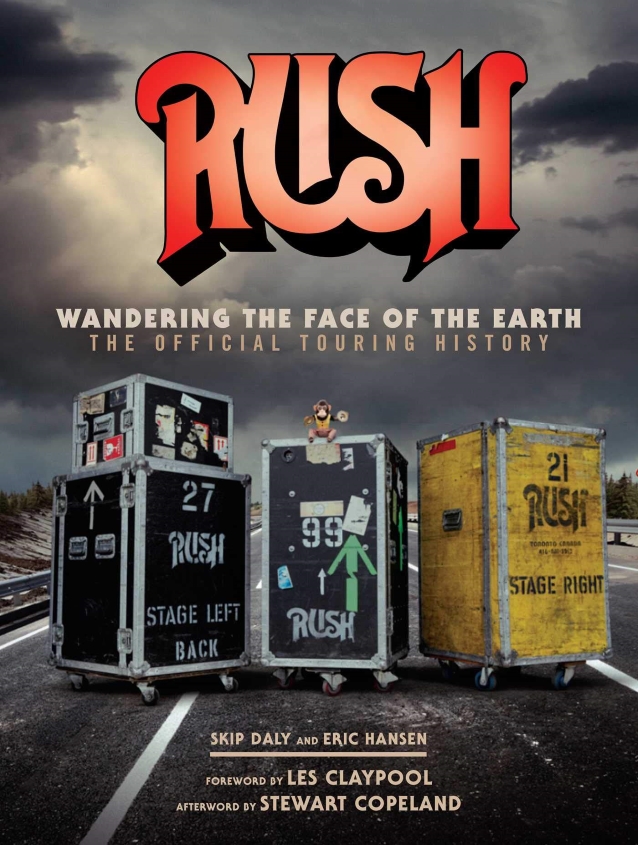