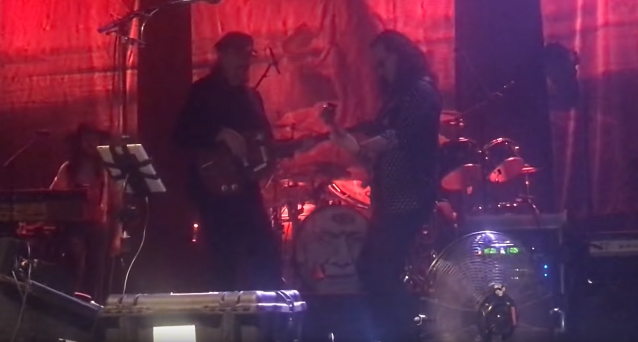 The RUSH legend joined the collaboration between PRIMUS bassist Les Claypool and Sean Lennon on stage to perform a cover version of THE BEATLES' "Tomorrow Never Knows".

Lee's friendship with Claypool goes back to a period in the 1990s when PRIMUS opened for RUSH.

Geddy interviewed Les for his recently released book, "Geddy Lee's Big Beautiful Book Of Bass", which showcases Lee's collection of bass guitars and the stories behind them.

The Toronto concert marked THE CLAYPOOL LENNON DELIRIUM's first show of a spring tour. The band is promoting its recently released album "South Of Reality".

Lennon — son of John — and Claypool began working together in 2015, after Lennon's band, THE GHOST OF A SABER TOOTH TIGER, toured as an opening act for PRIMUS. They released their debut in 2016 and followed it up with "South Of Reality", which came out in February via ATO Records.