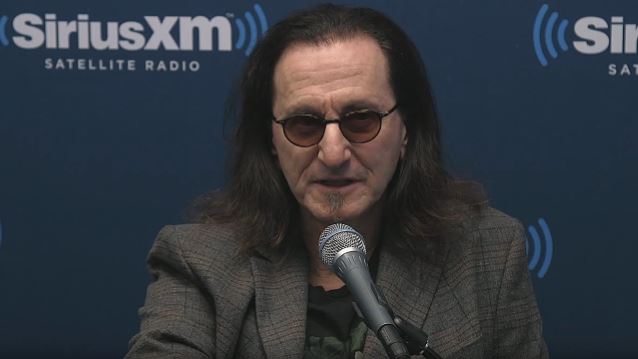 Outspoken filmmaker Michael Moore turned up at SiriusXM studios earlier in the month to moderate a Town Hall fan question-and-answer session with RUSH co-founders Geddy Lee and Alex Lifeson. Asked about RUSH's future plans following this year's "R40" live dates, which were billed as the band's last major tour, Lee said (see video below): "Well, it's a difficult question to answer; it's always emotional. But at this point, we're not able to agree on doing more tours. So at this point, it doesn't look possible for another tour. But I would say that, being an optimist and a patient person, I hope that that will change. I know that we've talked about more music as RUSH, and that is certainly something possible. There are other ways of presenting our music to the public, and that's possible. But we haven't discussed it since the end of the tour."

He continued: "The end of the tour was quite emotional for us as well. We didn't really know what it meant — whether we would be back there looking at all your smiling faces again. I love touring, and I'm ready to go on very short notice. But my life is simpler than my partners' lives. And Neil [Peart, drums] has a complicated life — he has a young daughter, a new family that he really feels pain to leave, and I understand that. And he has physical issues when you play like a monster for three hours and the body is not cooperating with him, and it's very hard for him. And he pays a price. Like, there are times when you see him backstage in the middle of a tour and he's really suffering. So he's not sure he's got the fortitude to continue playing like that. But maybe there's an answer down the road, after some time. And that's why we're trying not to be hasty and making any big conclusions. We'll just let everybody be and everybody find their center and see if we can come together with some plans."

Added Lifeson: "I feel exactly the same way. I felt very healthy on this last tour after having some issues over the last few tours. I felt great on the tour, and I loved playing every night and I loved playing every note of every one of those songs. And I still have some in me that I would like to do. But for all those reasons, like Ged just said, we do need to have a little time to just settle and see where it goes."

RUSH recorded and filmed "R40 Live" over two sold-out shows in the band's hometown of Toronto at the Air Canada Centre on June 17 and June 19, 2015 in the middle of their "R40 Live" 35-date North American tour.

"R40 Live" had the trio of Geddy Lee, Alex Lifeson and Neil Peart, performing a career-spanning live retrospective, celebrating their 40-plus years together. The epic live shows by the Rock And Roll Hall Of Famers were captured with 14 cameras to present the band feature-film style.