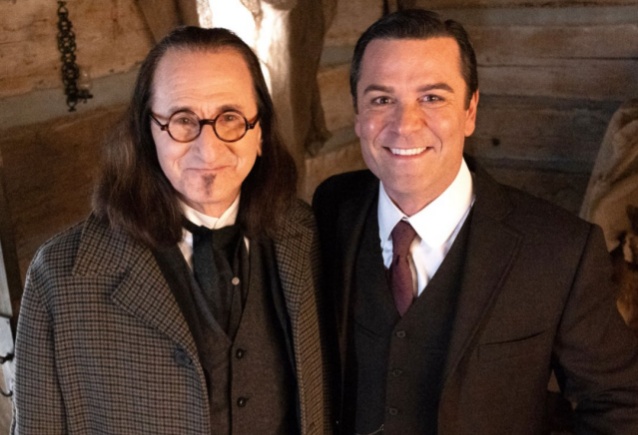 RUSH's Geddy Lee will make a guest appearance in the next episode of the long-running CBC mystery drama "Murdoch Mysteries". The episode, dubbed "Devil Music", will premiere in Canada this coming Monday, March 21.

A 15-second clip of Geddy's appearance in the show is available below.

Set in Toronto at the dawn of the 20th century, "Murdoch Mysteries" is a one-hour drama series that explores the intriguing world of William Murdoch (Yannick Bisson),a methodical and dashing detective who pioneers innovative forensic techniques to solve some of the city's most gruesome murders.

As previously reported, Lee will release a memoir in the fall of 2022. The book will be edited Noah Eaker and made available via HarperCollins.

Last September, Lee was honored with a solo Lifetime Achievement Award at the Artists For Peace And Justice (APJ) gala in Toronto, Ontario, Canada. Lee was recognized for his "commitment to philanthropy," including his support of brain cancer research, Toronto Food Bank, Alberta Floods, Doctors Without Borders, Grapes For Humanity, United Way, Canadian Museum For Human Rights and Casey House.

Lee appeared on Dave Grohl and his mother Virginia Hanlon's series "From Cradle To Stage", where he spoke about growing up the son of Holocaust survivors with his late mother, Mary Weinrib.

CELEBRATE THE MOMENT. 🎶 🤟 Next week the one and only #GeddyLee steps into the LIMELIGHT as a guest star on #MurdochMysteries! 🤩 What role do you think this WORKING MAN will play? Find out Monday at 8/8:30 NT only on @cbc and @cbcgem. pic.twitter.com/52BnXnk5Pj

🚨THIS IS NOT A DRILL🚨 Next week's episode is going to have you RUSHING to your screen, so make sure to clear your schedule. 😏 With big things happening and a familiar face, you don't want to miss this one! 🍼🎶 pic.twitter.com/pnpXudNILS