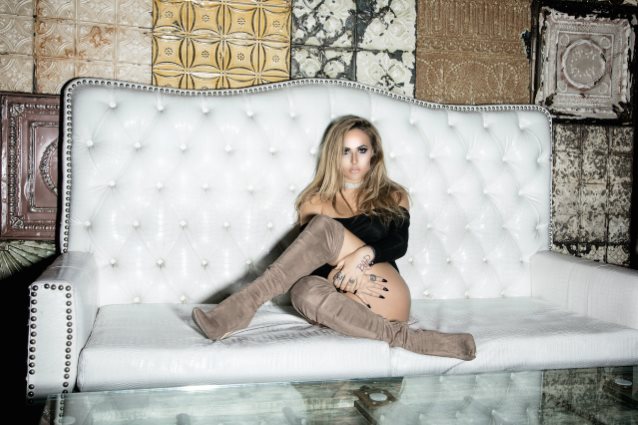 Russian "rock goddess" Moscow is on a mission to take over the world of rock. With musical influences ranging from MÖTLEY CRÜE to ASKING ALEXANDRIA, Moscow strongly believes that it's time to reflect on the legacy of rock icons and integrate a post-hardcore twist to their sound.

Quickly making a name for herself on the Sunset Strip with her go-getter attitude, she enlisted the help of Shawn McGhee of Las Vegas's The Hideout Recording Studio (HELLYEAH, FIVE FINGER DEATH PUNCH, PAPA ROACH) and Brian Steele-Medina (GEMINI SYNDROME) to produce her first single, "Queen Of Sin" and later recruited Dale "Rage" Resteghini (TRIVIUM, HATEBREED, ESCAPE THE FATE) to film the video at the infamous Whisky A Go Go.

When asked about the meaning behind "Queen Of Sin", Moscow said: "The 'Queen Of Sin' idea was originally was based on the philosophy of Nietzsche, which basically says that you are your own god and your own devil, you are in charge of your morals, to decide what's good and what's bad. Listen to your own Queen Of Sin, which we all have deep inside.”

Moscow will debut her live performance on February 6 at the Whisky A Go Go in West Hollywood, California with special guests.

Call her Tsaritsa (queen) like the Russian rockers all do, or call her Moscow — her nom de guerre in the international music scene — but you are going to call (attention to) this talented young lady who embodies the rebellious spirit of rock and the consummate class of royalty. Young, Russian, free and beautiful, a 16-year old Moscow (then known as Elizaveta Tursunova) struck out on her own to explore the world. Not wanting to be tied down to the wealthy young businessmen who had been trying to impress her, her young Russian schoolmates that adored her, or the rockers on the scene who hung on her every word, she fled to Cambridge, England. Never satisfied to stay in one place or know only one way of life, Moscow traveled to and lived in London, Paris, New York and Los Angeles, growing even more bold and worldly with every stop. Throughout her travels, there was something missing… something she found in Los Angeles. The Sunset Strip music scene spoke to her sense of rock history and her musical style. Having read about all her favorite artists' lives in Los Angeles (MÖTLEY CRÜE, Steven Tyler, Slash),the Sunset Strip seemed surreal to Moscow. Just breaking into her 20s and breaking into the music world, she is wise beyond her years.