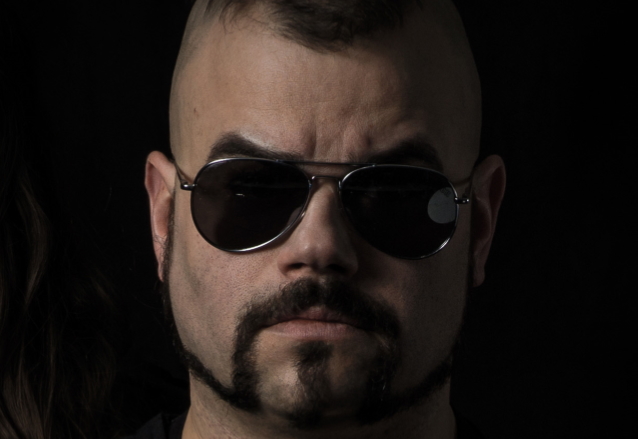 SABATON Frontman On Touring During Pandemic: 'Not Many Bands Can Afford To Lose Any Money'

In a new interview with Germany's Rock Antenne, SABATON singer Joakim Brodén spoke about what it has been like for him and his bandmates to play their first pandemic-era shows. He said (as transcribed by BLABBERMOUTH.NET): "One thing we've learned here is all countries handle this differently — very differently. In America [where we toured with JUDAS PRIEST], it worked fine, both from the audience perspective, I would say, and the touring-side perspective. JUDAS PRIEST did usually two shows after each other and then we had a day off; that was the normal thing. And every first show after a day off, we'd get tested — everyone in the touring party — before entering the venue. The people who came to the shows had to be vaccinated or have a test that's less than 24 hours or something like that. And pretty much it was very relaxed. We didn't go everywhere, but we were in, like, six or seven or eight states walking around, and it was a pretty relaxed situation. As soon as you go inside, mask up — regular mask — and then everything else was sort of normal and open."

Asked if he is afraid that SABATON's upcoming European tour, which is scheduled to kick off in March, might get canceled, Joakim said: "Nah, I don't think so. I'm not that worried at all. I mean, it might — I can't make any promises. You'll have to ask people higher up in the German government than I am. [Laughs] Unfortunately, I have not managed to become chancellor yet.

"It's a different situation for every country as well," he continued. "That's what's worrying more, I think. Because if we're touring America, it's one nation. Okay, different states, different rules, in a sense. But we're having a tour in Sweden in January, and I'm not worried at all, because that's one country — one government gets a say. The trick for bands today, and this is a real problem, especially now in these times, is that planning a tour, booking a tour, there is no centralized agreement. I'm not saying the European Union should do anything like that; I'm not here to talk politics at all. But the worry for any promoter or band or booking agent is, like, yeah, we can book a whole tour and then, let's say, France and Germany decide to lock down. That makes the whole tour impossible to do, because then the band would be losing money, and everybody would be losing money. And at this time, trust me, not many booking agents, promoters and bands can afford to lose any money. So that's the worry about doing… Those who've done tours now and sometimes had to cancel the whole tour — actually, technically, they could have gone to one country but they couldn't put on the tour because of other stuff."

SABATON's tenth studio album, "The War To End All Wars", will be released on March 4, 2022 via Nuclear Blast Records. Written and recorded during the COVID-19 global pandemic, the concept album of 11 brand-new songs once again dives deep into the atrocities, miracles, and events tied to the early 20th century’s World War I. The tenth album of the Falun, Sweden-based five-piece will be available in an impressive variety of exclusive formats, including CD, vinyl, and cassette, with most available in limited editions.