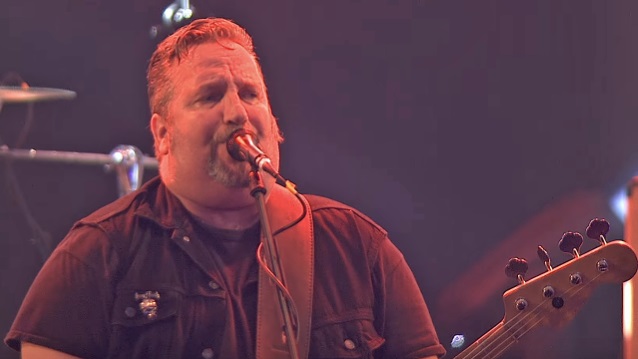 Professionally filmed video footage of SACRED REICH's entire August 4 performance at the Wacken Open Air festival in Wacken, Germany can be seen below.

For the first time ever with the original artwork, SACRED REICH's classic "Ignorance" album was made available in September as a special 30th-anniversary LP and digipak CD reissue via Metal Blade Records. The digipak CD features bonus tracks; the vinyl has received the "MB Originals" treatment, which means 400g heavy cardboard spine sleeves (inside out print),60x60cm two-sided artwork posters and 250g inserts. The album has also been remastered by Patrick W. Engel.

To purchase your copies, go to this location.

During an appearance on a recent episode of "The Official Danko Jones Podcast", SACRED REICH bassist/vocalist Phil Rind confirmed that the band has reconsidered its previous stance on recording new material.

"We're not opposed to maybe doing some new stuff, which is, for us, kind of a change of plan," Rind said. "We've always been adamant that we weren't gonna do any new music, and our attitudes have changed, so we'll see what's on the horizon."

But Rind admitted that the desire to create fresh material may come with its own set of challenges.

"Thinking about doing new music isn't just doing new music, it's making a commitment to do new music and support it," he said. "Wiley [Arnett], our guitar player, just opened a second restaurant, so it's pointless to try to do something if you really can't get behind it, so we need to talk about, if we do do something, is there an opportunity to support it properly, what are people available for, and all that kind of stuff.'

According to Phil, his motivation to get creative is not influenced by the potential demand that may — or may not — exist for new SACRED REICH music.

"Do people wanna hear [something new from SACRED REICH]? I don't know," he said. "I'm to the point where I don't care. I've always been more or less to the point that I don't care, because people go, 'Oh, there's a big audience.' I'm, like, 'Well, how do you know there's a big audience? How do any of us know?' We don't. We can make an assumption that there's an audience. But my point is, look, when we made our first record, there was no audience, no one knew who the fuck we were, and we did it anyhow, 'cause we didn't care, 'cause we knew we had to do it. So you just have to do it with the right attitude. You have to do it 'cause you want to, you think the time is right, you have something to say, and then you go from there. So there's all that crap."

Adding that his "voice has actually gotten better" over the years and describing himself as a "more confident" singer than he was in the past, Rind said that he is not entirely sure what musical direction a new SACRED REICH album would take.

"I'm super guilty of overthinking things, generally speaking, so I can obviously overthink, like, 'What does SACRED REICH even sound in 2017? Should I kowtow to whatever expectation that our fanbase may have of what we sound like?'" he said. "So there's all those things, like twenty years of not making new music. What do we sound like? And I finally just came to the realization we sound like whatever it is that we put out, and that'll be fine. Which is pretty obvious, I think, to probably most people, but to me, I had to work through the process and get to that thing. So we'll see."