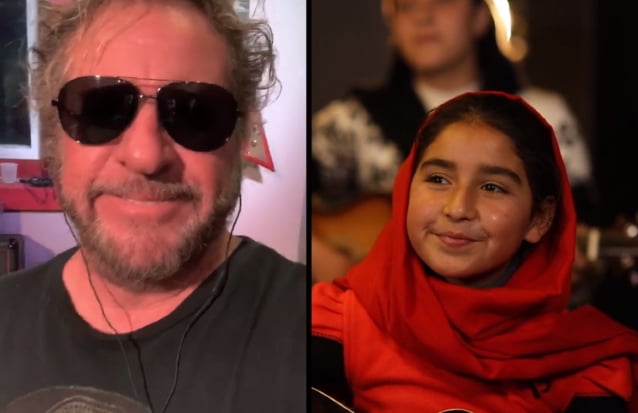 In 2020, the Miraculous Love Kids / Girl With A Guitar teamed up with guitarist Tom Morello (RAGE AGAINST THE MACHINE, AUDIOSLAVE),keyboardist Rami Jaffee (FOO FIGHTERS),bassist Kathy Valentine (THE GO-GO'S),guitarist Vicki Peterson (THE BANGLES),singer Cherie Currie (THE RUNAWAYS),guitarist Wayne Kramer (MC5),drummer Kris Myers (UMPHREY'S MCGEE),along with singer Inara George and multi-instrumentalist Greg Kurstin of THE BIRD AND THE BEE, to record a version of "Sweet Dreams" with unprecedented depth and dimension.

For 2021, Cordola connected with Hagar, a force of pure rock and roll goodness. On this sonic prayer for a more compassionate humanity, the singer's role in getting the message of the Miraculous Love Kids / Girl With A Guitar movement to the forefront of global awareness is a win-win for everyone.

"I'm proud of what you're doing," the onetime VAN HALEN frontman told the group after completing his vocal track. "Stay strong and fly like an eagle…"

Cordola reflects on why this song was chosen: "The simple yet powerful message behind 'Fly Like An Eagle' has never been more relevant and important, especially in war-torn, poverty-stricken places like Afghanistan. With its urgent call to 'feed the babies who have no food to eat, shoe the children with no shoes on their feet, house the people living in the street,' the eagle surveys the landscape and realizes that none of us can truly be free until we address the most pressing matters of the human condition — food, clothing, and shelter."

The girls featured in this video have all suffered from the wreckage of poverty, war, discrimination and other hardships. They have worked the mean streets of Kabul and witnessed firsthand the debris of human cruelty and indifference. Now, through the power of love and music, there is hope, joy and truth emanating from every fiber of their being.

"Fly Like An Eagle" is dedicated to the nearly 100 Afghan girls who died in a recent school bomb attack in Kabul.

Music at its highest level gives rise to these fundamental human creeds and to the philosophy of the Miraculous Love Kids: "It shouldn't hurt to be a child."

According to the United Nations, over 20,000 children perish every day because of poverty and war. The goal of the Miraculous Love Kids / Girl With A Guitar is to help end this horrible human catastrophe.

The Miraculous Love Kids is a non-profit, 501(c)(3) organization established by Cordola.

For more information and to make a donation, go to miraculouslovekids.org.

Cordola began his journey through Pakistan, Afghanistan, and Iraq in 2010, collaborating with musicians on a peace-through-music project. "After visiting and meeting many kids who were living in poverty stricken areas and conflict zones, I decided to raise funds on their behalf," the musician recalls.

Since then, he has focused on musical projects aimed at raising awareness, resources and funds for some of the most vulnerable children in Pakistan, Afghanistan, and Iraq. In the wake of his work in these regions, he formed his own non-profit, 501(c)(3) organization called The Miraculous Love Kids, based on the premise that "it shouldn't hurt to be a child" and "that a kid with a melody in their heart has hope, and with hope all things are possible."

On September 8, 2012, sisters Parwana and Korshid were killed by a suicide bomber in Kabul, Afghanistan. The intended target was U.S. military forces. According to the troops who were there, the sisters sacrificed their own lives to save them.

During a visit to the region in 2014, Lanny met with the sisters' family, including their younger sibling Mursal, who had survived the attack. The family was living in absolute squalor, but when Mursal saw the guitar that constantly accompanies Lanny, she brightened up and asked if he would teach her to play so she could honor her sisters and other girls living in similar conditions. And with that, The Miraculous Love Kids/Girl With A Guitar was born.

In February 2016, Lanny moved to Kabul, Afghanistan, where he and Mursal presently teach guitar, English, and other life skills to hundreds of mostly girls at their Miraculous Love Kids studio.