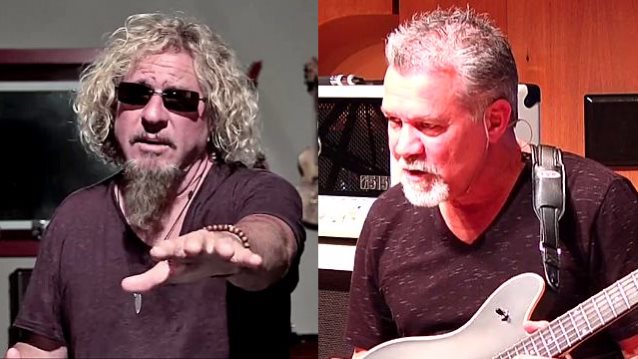 Sammy Hagar says that part of the reason he sent a tweet to Eddie Van Halen last month wishing him a happy birthday was the recent deaths of David Bowie and Glenn Frey. Hagar explains to the Classic Rock Report (hear audio below): "It just makes you stop and think that, you know, with my relationship with Eddie Van Halen and stuff that's always been in the toilet, it makes you say, 'I don't want to be buried with any regrets or bad vibes like that.' It makes you want to be just friends with everybody and say, 'Hey, look, forget it.' Even if you don't want to be in a band together, just let's be friends. No more enemies for me. You don't want to go to your grave with enemies. So that's what it's done for me. It woke me up and said, 'no more enemies.' And before I die, I won't have any, if I have my way."

Hagar last year blasted his former bandmates in an interview with RollingStone.com, saying there is "no chemistry" between the members of the group's current lineup, which includes singer David Lee Roth. Hagar explained: "I can only speculate on what I've seen on YouTube, things people send me now and then… There's just no chemistry up there. They don't like each other. I mean, it's obvious. It's like a backup band with a guy out there in front. I bet they don't say five words to each other offstage.'

Asked if he thinks he will ever speak to guitarist Eddie Van Halen again, Sammy said: "I would hope so. Because that would be really sad if any one of us — I'll put myself in the same category — took this to our graves. But who knows. Whatever. It's not my decision because I was the one they pushed out and tried to fuck over. To me, it's up to them to come back and say they're sorry."