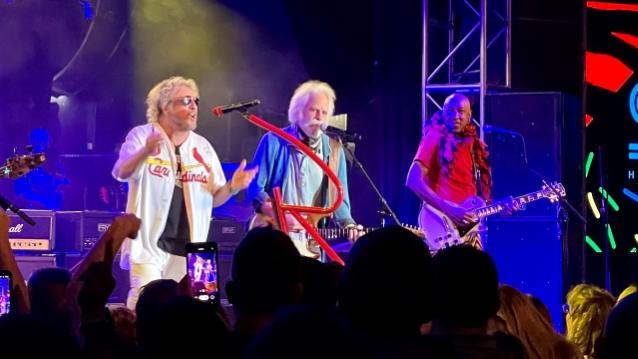 The crowd erupted when Weir joined THE WABOS on stage to perform GRATEFUL DEAD classics "Not Fade Away" and "Good Lovin'", as well as DEPECHE MODE's "Personal Jesus". Fans sang along to Hagar's hits, including "I Can't Drive 55" and "There's Only One Way To Rock", as well as a rockin' rendition of Toby Keith's "I Love This Bar".

Additional shows are scheduled on November 6, November 12 and November 13, all at 9 p.m.

"Sammy & Friends" celebrates Hagar's career, spanning four decades, from his solo career, MONTROSE, VAN HALEN, CHICKENFOOT, THE CIRCLE, and surprise additions to the setlist depending on which of his musician friends take the stage with him.

Produced by industry leader SPI Entertainment and Hagar's manager, Tom Consolo of TC Management, "Sammy Hagar & Friends" sold out each show in under two hours. New dates will be announced for 2022.

And then Bob Weir popped in… #thegratefuldead

I never thought this would be the night that we would get to see Sammy Hagar and Bob Weir, from Gratedul Dead on stage together 🙀
⭐️ wow 🤩