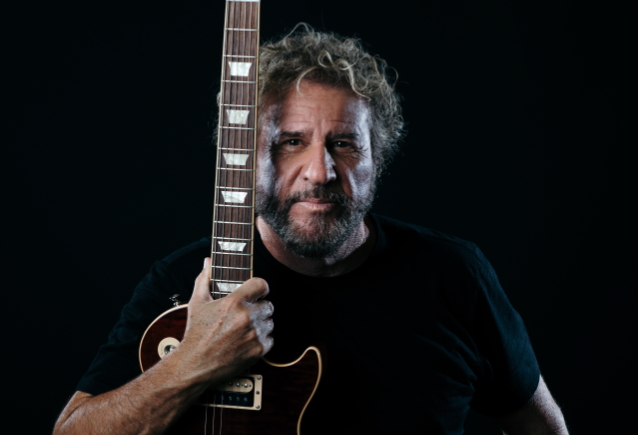 SAMMY HAGAR On Retirement: 'I Will Never Announce A Farewell Tour'

Sammy Hagar has admitted that he is thinking about how he will eventually retire from performing live.

The 75-year-old musician, whose raspy, soulful voice has been one of the most recognizable sounds in hard rock, from his early hits as a member of MONTROSE and a solo artist to his multi-platinum run as VAN HALEN's frontman in the 1980s and 1990s, discussed his plans for a possible retirement from the road during an appearance on SiriusXM's "Trunk Nation With Eddie Trunk" on Wednesday (November 2).

He said (as transcribed by BLABBERMOUTH.NET): "I've thought about it long and hard. And that's one of the reasons why I don't want to go out and tour too much next year, because it could be the last one, and I don't really know. My thing is I would never — I'm saying never say never. Well, right now I'm gonna say I will never announce a farewell tour, go do a big, long tour and then keep going and keep going, like all these other people do. It makes me sick to do that. I would rather not say nothing and just… when I do my last show, it's my last show. I might say it then, but I'd rather not make no pre-announcement, in case I wanna keep going.

"I'm so glad you asked that question. It's been on my mind real hard," he continued. "How do you go out? Do you just go away? I don't know. I'm too public of a figure and I have too many businesses and things to where I can't just go away; somebody's gonna catch me somewhere. They're gonna say, 'What are you doing?' So it seems like I almost have to make an announcement, but I'm not solid with that yet, and it's not time yet. But I am thinking that way. How am I gonna do it when it's time? And I don't know. I'd rather just say one show, 'You know what? That's the last show. I'm done. I can't do it anymore.' I'd rather just say that."

When host Eddie Trunk asked Hagar to confirm that he will not do any "money-grab" farewell tours, Sammy responded: "The day I do something just strictly for money at this stage of my life, you can call me a greedy piece of shit. I do not need money, and it's not why I do things. I don't blame some people for doing things for money — you have to; you've gotta make a living, for god's sakes — but I don't have to. So at this stage of my life, no money grabs."

Hagar's second studio album with his Billboard chart-topping supergroup THE CIRCLE, "Crazy Times", was released on September 30 via Ume. The LP found Hagar, fellow Hall Of Famer and VAN HALEN bassist Michael Anthony, Grammy-winning drummer Jason Bonham and Grammy-winning guitar virtuoso Vic Johnson traveling to Nashville to record the album with eight-time Grammy Award-winning producer Dave Cobb at Nashville's historic RCA Studio A. The follow-up to their much-lauded debut "Space Between", a multi-category No. 1 Billboard-charting album, includes 10 songs, nine of which Hagar wrote or co-wrote, along with a notable cover, "Pump It Up", a 1978 song by Elvis Costello and THE ATTRACTIONS. The song "Crazy Times" was written by the whole band along with Dave Cobb and recorded live.