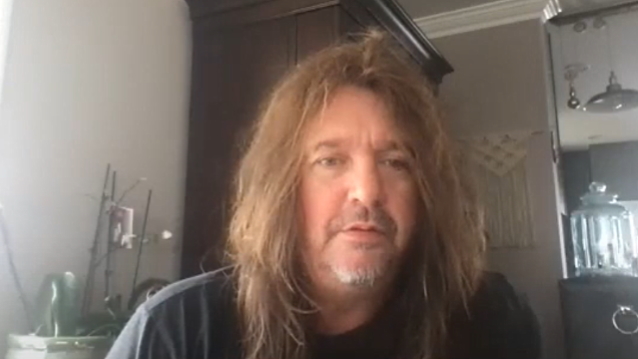 In a new interview with Metallerium, SKID ROW guitarist Dave "Snake" Sabo once again spoke about the decline of the music industry as consumers value access over ownership and experiences over assets. He said (as transcribed by BLABBERMOUTH.NET): "Napster [the pioneering late 1990s/early 2000s peer-to-peer file sharing Internet service] came about because a lot of college kids just didn't have any choice; they couldn't afford to pay for a CD, especially if they only liked one song on the CD. And the record labels should have understood this, but they were so damn greedy that they didn't want to adapt to the needs of a 17-, 18-year-old kid in college who's got no money. He's barely got enough money for a 'happy meal' at McDonald's. He doesn't have 17, 18 bucks to pay for a CD. And so Napster came along because it gave people the option to listen to music… I mean, it was for free, which I didn't agree with as well, but I absolutely understood the premise behind it.

"So I'm all about music being available to everybody at a very fair and reasonable price. And I also believe wholeheartedly that the artists should be compensated fairly; it works both ways.

"I'm a fan of the streaming services because of the immediate access that people can have to your music," Snake explained. "I think it's very crowded. The music business is more crowded than it's ever been. But at the end of the day, the great stuff always seems to be discovered and rise to the top. If someone likes your music enough, they'll sit there and they'll tell somebody, 'I love it. You've gotta check it out.' Just like in the old days with tape trading — same type of thing, but it's just on a grander scale.

"So I understand the idea of quote-unquote singles being released, but I still at things from an album standpoint, and the way we create the sequence of a record and everything like that, all that stuff is still important to me," Sabo added. "It's probably not as important to the consumer as it used to be, because when we got a new record or a new CD, it was a ritual, man. You would get it and you would get home as quickly as you could or get in your car and unbox it or pull the wrapper off and get out the liner notes and look at the lyrics and all the credits and all the 'thank you's and everything like that and see if you recognize anybody on there. It was a ritual, and nothing else mattered for that hour that you listened to that CD or that album; that was it. And it's not like that anymore for most music consumers. I'm not saying all, because I still… I love getting vinyl and putting it on and listening to it and sinking into it. But I'm thankful that we do have avenues out there for people to consume music still. It looked a bit shaky there for a bit, but it's starting to work its way out. Just like when CDs came in to take the place of [vinyl] albums, streaming came in to take the place of physical product. There will always be physical product — people will always want to have ownership of that — but the way we consume music is just different, and I'm okay with that."