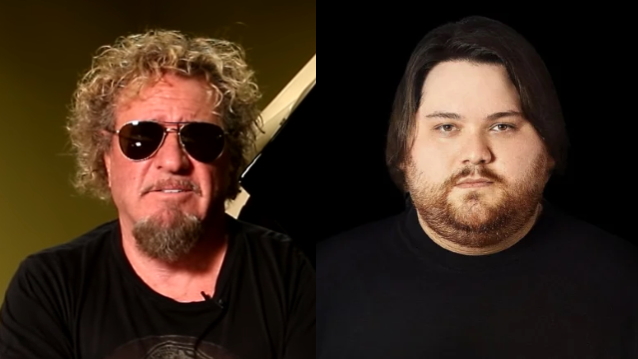 Sammy Hagar has spoken out again about his renewed friendship with Eddie Van Halen in the months leading up to the legendary guitarist's death.

Hagar, who previously said he hadn't talked to Eddie since since the conclusion of VAN HALEN's 2004 reunion tour, discussed his former bandmate in a new interview with "Lipps Service With Scott Lipps".

Hagar said (as transcribed by BLABBERMOUTH.NET): "It was so weird 'cause he was in such a comfortable, cool space, because he was sick and he was over it. He wasn't talking about, 'Let's go out and party,' and wasn't, like, 'Hey, you asshole, you said this.' He was chill. He was beyond it. And I felt it. It was very cool. And we had a really great text relationship at least weekly, and he would talk about [his son] Wolfie a lot, saying 'Wait till you hear [Wolfgang's solo album].' He'd send me stuff, and I'd say, 'Wow. The motherfucker can play.'"

Hagar also talked about the self-titled debut album from Wolfgang Van Halen's MAMMOTH WVH project, which came out in June.

Hagar previously said that Eddie's death was "hard to accept" when he first got the news. Two days after the guitarist's passing, Sammy and fellow ex-VAN HALEN member Michael Anthony (bass) paid tribute to Eddie Van Halen at Hagar's annual birthday bash, which was moved to Catalina Island in California due to the coronavirus pandemic. Prior to launching into a rendition of the VAN HALEN classic "Right Now" with the rest of THE CIRCLE band, Hagar led the audience in a moment of silence as they stood quietly for 20 seconds in memory of Van Halen, who died on October 6, 2020 at the age of 65 following a long cancer battle.

Sammy, Eddie, drummer Alex Van Halen and Anthony last teamed up in 2004 for a U.S. summer tour. In exchange for taking part in the tour, Anthony reportedly had to agree to take a pay cut and sign away his rights to the band name and logo.

Eddie died at St. John's Hospital in Santa Monica, California. His wife, Janie, was by his side, along with Wolfgang and his brother Alex.

The guitarist was diagnosed with mouth cancer in 2000 and had tongue surgery. He later battled throat cancer and reportedly had been receiving radiation treatment in Germany.