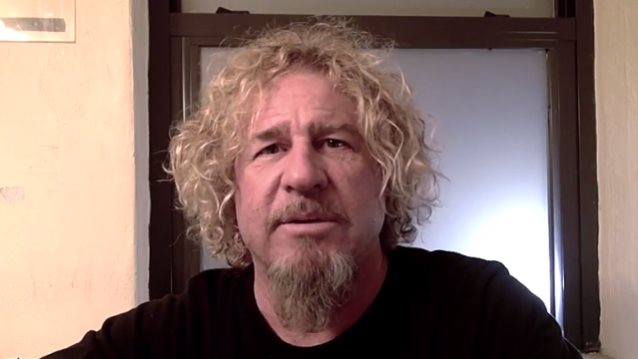 In a brand new interview with Rolling Stone magazine, legendary rocker Sammy Hagar was asked if he could see any scenario where he would play with VAN HALEN again. "I would play with anybody that loves me and that I love," Hagar replied. "That would include VAN HALEN, but the love's not there right now. I do love those guys. We really bumped heads on the last tour [in 2004.] Anyone that saw that last tour or read my book knows that I'm not gonna take any blame 'cause there's no blame to give me. I went out and did my job probably better than anyone else in that band. Anyone that saw the show, I think, would agree with me. That tour was just a mess and I would never go into a mess like that again. I'm too happy as a human being to be that miserable ever again. I was miserable for the last 40 shows. The first 40 shows I was thinking, 'Well, maybe Eddie [Van Halen] will straighten out' or 'Maybe this can come together.' But that didn't happen, and by the last 40 I was miserable. I would, however, be in the original band that we started. That was a love fest full of creativity."

Hagar, who has been touring with THE CIRCLE, a combo consisting of Michael Anthony, Jason Bonham and Vic Johnson, told The Pulse Of Radio not long ago that he occasionally pines for VAN HALEN: "Y'know, I miss VAN HALEN," he said. "I don't like them fuckers and fuck those guys for what they did to Mikey [Anthony, former VAN HALEN bassist], especially — not me. Unnecessary. Bad guys. But I miss 'em, y'know? [Laughs] I miss that musicianship and that creative spark and that friction that made it all work, y'know?"

VAN HALEN reunited with original singer David Lee Roth in 2007 after a 23-year gap, touring several times and releasing an album called "A Different Kind Of Truth" in 2012.